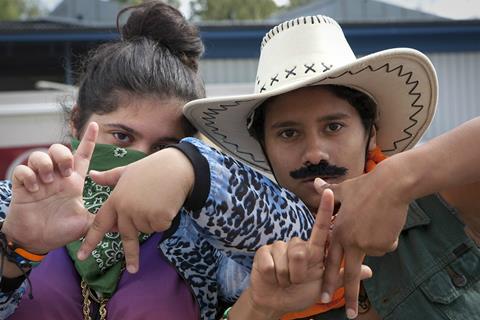 A council initiative to create a promotional video for the small Swedish industrial town of Lafors prompts two teenage schoolgirls to create their own rival project. But while the council’s puff piece tries to airbrush out any hint of poverty and remove any non-white people from the frame, the phone footage opus created by Aida (Zahraa Aldoujaili) and Dana (Yara Aliadotter) captures the true spirit of the community, for better and for worse. Gabriela Pichler’s sophomore feature (following 2012’s Eat Sleep Die) is a feisty delight, combining fizzing energy with finely-crafted characters and a light-footed approach.

The girls’ movie, like the one they inhabit, is all about giving voices to people who don’t always get them

The film plays in Rotterdam following its world premiere in Goteborg, and further festival interest should follow. Youthful brio and an almost offhand depiction of young women of colour doing whatever the hell they feel like doing – Aida and Dana drive motorbikes, ride skateboards, learn boxing and play the drums – should catch the eye of arthouse distributors, particularly those looking for strong female voices both in front of and behind the camera. The picture shares some of the maverick crackle of We Are The Best, not to mention that film’s infectious joy in the act of creating, uninhibited by lack of experience and skill.

A terrific opening sequence, using deliberately artless amateur-style footage, captures the annual highlight in the Lafors social calendar. As the hungover strains of Lee Hazlewood and Nancy Sinatra’s ‘Summer Wine’ play out, we see footage of the town’s Wild West themed celebration, a nod to the community’s reliance on cattle and the leather industry. Aida and Dana, wearing fake mustaches and ten-gallon hats, feature prominently. Having wrung every last drop of fun out of the town’s party, they are looking for something to do next.

Musse (Fredrik Dahl), the ideas man at the otherwise moribund town council, bounces into the girls’ class at school at just the right moment. His brainwave is for the kids to create their own vision of the town to provide an unconventional spin on a promo video. The film will be used to impress the German delegation from budget supermarket chain Superbilly, which is considering locating a branch in the town. Although the council soon rejects the teenagers’ offerings and hires a professional director to deliver a more polished, positive view, Aida and Dana have caught the filmmaking bug, and continue with their project.

At first steeped in adolescent irony – “Here it is: the roundabout elk. The pride of Lafors” – the girls soon start to unpick some of the tensions within the town. Their movie, like the one they inhabit, is all about giving voices to people who don’t always get them: people of colour, women, the elderly, the poor, those for whom Swedish is a second language to be wrestled with rather than a tool to be used.

Along with Dana and Aida, Musse is foregrounded as a character. The second generation child of Tamil immigrants, he never learnt to speak his mother’s birth language. Now, as she fades into dementia, her Swedish atrophies also and she talks only in Tamil. Meanwhile, his ebullient enthusiasm for the official video is gradually diluted as it becomes increasingly clear that faces like his don’t fit into the council’s view of what makes his town desirable.

Technically, the film is far more accomplished than it first appears. Although much of it looks as though it genuinely might have been shot on a phone by a pair of impatient teenagers, Pichler ensures that the camera is always in the right place when it matters. Likewise the screenplay, while never over-emphasising the characters’ backstories, gives us just enough detail to satisfyingly flesh them out.