'Among The Believers': Review 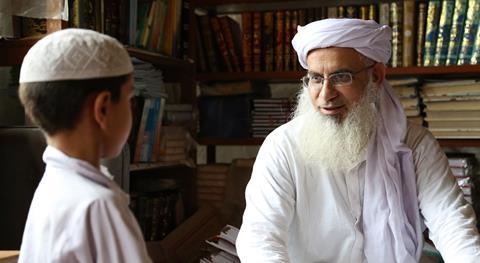 Revelatory and troubling, Among the Believers probes into the origins of religious violence, entering the infamous Red Mosque in Islamabad, Pakistan, which has functioned openly as an avowed incubator of jihad.

There’s enough cinema in Among the Believers to set it a step above solid respectable investigation.

The documentary explores the human lives behind shocking stories of attacks and bombings which have been featured all over the news. Its surprising access to Islamic clerics and schoolchildren make it watchable in a way that will appeal to cable networks in English-speaking countries. With tales of ISIS recruiting campaigns haunting the West, the film could also attract some limited art-house exposure. As with any documentary about violence in the Islamic world, its urgency could be undercut if another tragedy claims new victims.

Co-directed by two Pakistanis living in Pakistan and New York, Among the Believers is true to its title in penetrating the Red Mosque, where boys and girls at its madrassa are trained, separately, in grueling recitations of the Quran and in obedience to the fierce rectitude of sharia law. We hear the now-infamous imam of the mosque, Abdul Aziz Ghazi, speak at length of the Quran’s mission to fight infidels. (The bearded Aziz became an odd celebrity in 2004, when he escaped, wearing a burqa, from a bloody government attack on the mosque.) We also hear from a rare and remarkable young girl, Zarina, who fled the madrassa to return to the poverty of her family home.

The contours of this investigation by Hemal Trivedi and Mohammed Ali Naqvi move from the grueling poverty of young children whose overburdened parents send them to schools which cost nothing, to strict indoctrination in crowded quarters, to confrontations with government officials. If violence leads to casualties among teachers and students, martyrs provide the madrassa children with heroes to admire and crimes to avenge with jihad.  Imam Aziz is candidly open about that, praising a 2014 Taliban attack in Peshawar that killed more than 132 children. The future looks grim as Aziz remains resolute.

Religious life in the madrassa visited by the filmmakers can be disturbingly dramatic. As the film opens, a boy of six or seven is taken to the imam’s office, where the child bears witness to the power of his training. Pledging his loyalty to his teacher, the boy bursts into anger, praising God and issuing a warning to potential enemies: “If you dare to enter here, we will destroy you in the name of jihad.” It’s more than child’s play, as Aziz watches approvingly.

That jarring scene and others are captured in close-ups by the cinematographers Sardar Habib Ur Rehman, Haider Ali, who get near enough to the boys to witness the early stages of training innocents to be zealots. (And they watch madrassah children give in to temptation and steal a glimpse of cricket on a television in a shop window – a profane pleasure.) The camera also shows us the poignant vulnerability of Zarina, who loves school and dreads the life that most women around her endure.

There’s enough cinema in Among the Believers to set it a step above solid respectable investigation. Production values are excellent – sometimes elegant  — for a subject that has put cameramen and a lot of Pakistan on the run. The filmmakers over-rely on generic news clips to pull a complicated subject together at the end.  Yet for most of the way, this documentary gets inside people as much as it gets inside the Red Mosque.