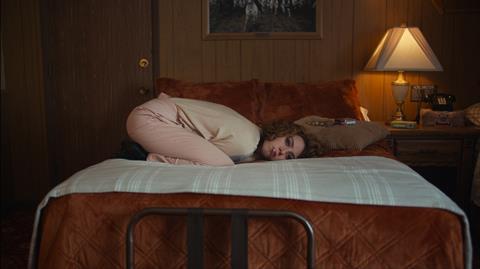 Indie provocateur Jim Hosking’s follow-up to The Greasy Strangler (Sundance 2016) continues the filmmaker’s penchant for unpleasantness. Deliberately off-putting, Hosking’s latest tests the audience’s patience with frustratingly unfunny scenarios and an array of nasty, angry characters doing unpleasant things. Even with well-known comic actors Aubrey Plaza and Craig Robinson, An Evening With Beverly Luff Linn is a vexing anti-comedy committed to catering only to the most self-selecting niche audiences.

It comes across as absurdity simply for absurdity sake, without making any greater point

Supported by the BFI and Film4, this British/US co-production, which will make its international premiere in Rotterdam, represents an original and iconoclastic cinema—but one that’s unlikely to travel much outside of film festivals and the most adventurous venues and online outlets.

Set in the ugliest version of the 1970s, dominated by a color palette of browns, mauves and yellows, the story begins at Bob’s Restaurant, where waitress Lulu (Plaza) is married to her malignant manager Shane Danger (Emile Hirsch, moustachioed and cartoonish). After Shane absconds with a cashbox owned by Lulu’s cousin, she ends up stealing the money herself with the help of Colin (Jemaine Clement), a mysterious stranger passing through town, who was hired to retrieve the cashbox.

Soon after, Lulu takes Colin to the Morehouse Hotel, in the hopes of reuniting with a lost love, Beverly Luff Linn (Robinson), the star of the hotel’s headlining show “An Evening With Beverly Luff Linn For One Magical Night Only.” As Lulu and Colin cross paths with Luff Linn and his partner, a bearded Scottish companion (Matt Berry), it eventually becomes apparent that Lulu and Luff Linn have an unresolved romantic history at the same time as Colin finds himself falling hard for Lulu. Jealousies, grotesque cocktails, secret messages, and visits to the pool ensue.

The best part of the movie by a longshot is Clement’s Colin. The New Zealand actor manages the impossible, endowing his character with pathos in Hosking’s mostly misanthropic universe. With large yellow-tinted glasses, shaggy hair and a costume dominated by all manner of browns, Clement is barely recognisable on the surface. But his sensitivity and earnestness shines through in legitimately amusing scenes in trying to gain Lulu’s affections. Particularly memorable is a childhood confession about getting candy for his proper “poopies” in the toilet. Anytime he says some variation of “poop,” it’s funny.

Plaza adeptly plays along with the material, fully committing to the strange surroundings and her obsession for Beverly Luff Linn. But Craig Robinson, a terrific and charismatic comic actor, is wasted here, spending the majority of the movie inexplicably grunting like Frankenstein and suffering from stomach gas.

With hints of John Waters and David Lynch (but without the political or philosophical implications), the film trots out random oddballs for no other reason than ratcheting up the strangeness. Are we to laugh at these strange-looking human creatures? What’s so funny about a man’s uncontrollable coughing? Or fat people engaging in sexual intercourse? It comes across as absurdity simply for absurdity sake, without making any greater point.

There’s no doubt that Hosking has delivered a unique and comprehensive vision, with every detail — from paisley patterns to ridiculous wigs, polyester costumes to a ‘70s-inflected synth score — united in the service of his weird and woolly world. But he also appears steadfast in his mission to frustrate and exasperate the viewer. When the story delays the climactic “An Evening With Beverly Luff Linn For One Magical Night Only” a second night, and all those in the hotel must wait yet another 24 hours for the big show, they’re not the only ones who feel trapped.