The diabolical dolly is back 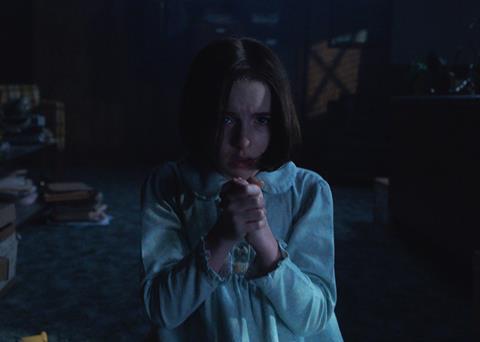 It’s a toss-up which sensation — dread or frustration — reigns supreme in Annabelle Comes Home, the latest chapter in the Conjuring franchise. With his directorial debut, Gary Dauberman hews closely to the formula that worked well in previous instalments — notably, a respect for old-school horror, replete with elegant, sustained suspense — but there’s also a noticeable uptick in the kinds of silly genre conventions that this series has often avoided. Annabelle Comes Home has effective scare sequences, especially as the film ratchets up the tension in its final reels, but this sequel ultimately feels too mechanical, and too familiar, to unnerve as proficiently as previous entries.

Landing in US theatres on June 26 — it doesn’t hit the UK until July 10 — this Warner Bros. release hopes to continue the Conjuring universe’s commercial hot streak. The two Conjuring movies grossed $640 million worldwide, the two Annabelle spinoffs garnered $564 million, and last year’s The Nun brought in a remarkable $366 million. These low-budget fright-fests are guaranteed moneymakers, with the appearance of The Conjuring’s Vera Farmiga and Patrick Wilson’s, Annabelle Comes Home has an added interest for franchise fans.

Taking place after the events of The Conjuring, the new movie stars Mckenna Grace as Judy, the shy daughter of notorious paranormal investigators Lorraine (Farmiga) and Ed Warren (Wilson). An outcast at her school because of her parents’ strange profession, Judy is friends with her sympathetic babysitter Mary Ellen (Madison Iseman), who will keep an eye on her while Lorraine and Ed go out overnight on a job. Joined by her snarky friend Daniela (Katie Sarife), Judy soon learns that the Warrens’ house possesses evil spirits — including that of the diabolical doll Annabelle.

Annabelle Comes Home represents a merging, of sorts, of the original Conjuring movies — which focused on the world of Lorraine and Ed’s investigations — and the Annabelle films, which were prequels that concentrated on this cursed doll. Unfortunately, Farmiga and Wilson are barely in the movie, and the Warrens’ gravitas and intelligence are badly missed.

Dauberman, who wrote the screenplays for the earlier Annabelle movies and The Nun, most assuredly has a feel for the franchise, and as writer and director of Annabelle Comes Home, he does a solid job of conjuring up the ominous tone and creeping anxiety we have come to expect. But as gripping as the new film can be, making great use of Michael Burgess’ low-light cinematography and Joseph Bishara’s slithering score, the storytelling is undone by questionable character decisions and some odd stylistic choices.

What made the first Conjuring so welcome was director James Wan’s clear love for classic horror films such as The Exorcist, emphasising slow-burn terror instead of cheap jump scares or copious gore. Similarly, albeit less promisingly, Annabelle Comes Home almost feels like a callback to another bygone era — that of cheesy 1980s horror flicks featuring attractive, not-particularly-bright teenagers and the occasional interlude for campy comedy.

Thankfully, Dauberman never goes quite that broad, but his characters do tend toward the clichéd and the dim-witted. As the kind-hearted babysitter, Iseman mostly feels like a standard scream queen, while Sarife is burdened with a role in which her character does stupid things in order to further the plot. (Daniela is not the type to heed written warnings that emphatically declare that certain glass cases should not be opened.) Attempts to justify the women’s behaviour on emotional grounds aren’t particularly satisfying, but at least Grace projects a quiet confidence as Judy, who comes to realise that she has some of the same abilities as her parents.

It’s hard to argue with Annabelle Comes Home’s foggy, spooky milieu — or its wicked ability to draw out an audience’s unease as we wait for something to go bump in the night. But this film’s shocks are diminished, somewhat, by our awareness of this franchise’s patient, deliberate pacing — even the script’s mournful, hushed tenor is very much in keeping with the first Conjuring movies. The sequel’s nagging limitations are symptomatic of Annabelle herself: the first time we see the doll, it’s unnerving, but there are only so many ways for Dauberman to jolt us with Annabelle before it starts to feel perfunctory.