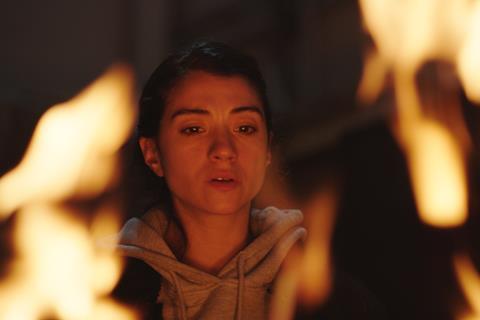 Youssef Chebbi takes the traditional ingredients of a conspiracy theory murder mystery (a baffling death, an enigmatic suspect, a reluctance to investigate, etc) and transforms them into something more offbeat in Ashkal. The film marks an ambitious attempt to use genre filmmaking to reflect on the recent history of Tunisia even if Chebbi doesn’t entirely carry it off. Initially intriguing, Ashkal grows less satisfying as it struggles to do justice to the disparate elements of the personal, the political and the supernatural, although further festival interest should still follow a Cannes world premiere in Directors’ Fortnight.

Ashkal is nothing if not atmospheric. Opening titles inform us that the film is set in the Gardens Of Carthage in north Tunis. Intended to symbolise a modern, prosperous city, the area halted construction following the Tunisian Revolution and the fall of President Ben Ali in 2011. Work has resumed but what remains is an eerie ghost town of half-finished buildings, abandoned sites and stray concrete pillars that reach for the sky. Dogs root in the rubble and sheep graze nearby. Chebbi seems fascinated by the architecture of this monument to a very different Tunisia, lingering over angles and lines, the play of light and shadow on places that have never been occupied.

Ashkal largely unfolds at night and cinematographer Hazem Berrabah infuses the film with a melancholy, film noir feel. Lights twinkle through a sleepy city and the dark corners of the night threaten danger. Street lamps provide the pools of light that illuminate the remnants of the Gardens Of Carthage and it is here that the charred remains of a night watchman are discovered. Detectives Fatma (Fatma Oussaifi) and Batal (Mohamed Houcine Grayaa) are sent to investigate. There is the suggestion that this may have been suicide but there is no trace of petrol, no hint of distress and no plausible reason why. Superiors exert pressure for a quick solution to the case.

A second victim is found burnt to death, this time the teenage maid of a prominent businessman. The authorities claim it as a coincidence and have another handy theory to explain it away. It is clear that something else is going on and, of course, it was street vendor Mohamed Bouazizi’s self-immolation that inspired the Tunisian Revolution and the wider Arab Spring.

Chebbi captures a sense of the contrast in personal circumstances between the two detectives. Batal returns from work to the bustle of family life and a hot, home-cooked meal. Fatma returns to her silent apartment and an empty fridge. Her father is a key player in the ongoing Truth And Dignity Commission seeking to address the police corruption of the past and justice for the victims of state torture. Batal is compromised by his connections to the practices of the former regime. Grayaa’s lumbering, dogged manner make Batal a sympathetic figure but we are never entirely sure if he is protective of Fatma or acting against her. Both characters are sketchily conceived and feel a little two-dimensional.

More cases of calm, self-immolation and the identification of a mysterious hooded figure who may be behind the deaths all help to advance the story. There is an underlying understanding that this is a moment of reckoning for the country. The instinct to frame two workers for one of the deaths shows that very little has changed in the workings of the police. Perhaps the growing number of self-immolations suggest that sacrifice and a wider awakening are still required for real change.

As the pace quickens there are some sudden, convenient lurches in the plot before an ending that begs more questions than it answers. A longer running time might have allowed for a smoother flow to the narrative, more complex characters and to give weight to some of the issues that feel lost along the way.