A hot, sweaty, stylish summer on the outskirts of Rome 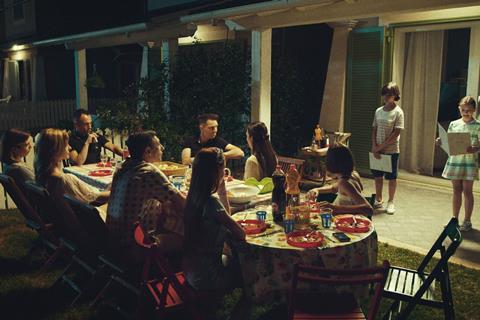 Provocative Italian feature Bad Tales is one of those films that aren’t afraid to confront you with the grimmest aspects of the human condition, but yet leave you feeling strangely exalted by the sheer cinematic invention involved. A strange hybrid – part quasi-abstract mood piece, part tragedy, part sour social comedy – this second feature by the D’Innocenzo brothers (2018’s Boys Cry) is an oddly poetic ensemble story covering events in three families over one long, hot and very bad summer on the outskirts of Rome.

Visually distinctive and intensely atmospheric, Bad Tales is good news for anyone on the lookout for new Italian stylists to succeed Paolo Sorrentino – although the D’Innocenzos, Damiano and Fabio, have a more introspective, less surreal style and a distinctly slow-burn manner of fragmented storytelling. Narratively too oblique and roundabout to connect with all art-house tastes, it’s nevertheless a striking discovery that deserves to travel outside the usual Italian-specialising circuits.

The film is framed by a voice-over from an unidentified adult male, who – over teasing close-up shots of ants, cracked toast and the odd net curtain - tells us that he’s continuing the story told in a girl’s diary found by chance, and also letting  us know that what follows is inspired by a true story, in turn inspired by a lie.

Sufficiently primed, or utterly thrown, by this intro, viewers may take some time to work out who’s who. But the setting is Spinaceto, on the outskirts of Rome, where various children while away a semi-rural summer and endure the company of their neurotic parents – especially dads Bruno (high-profile Italian actor Elio Germano) and Pietro (Max Malatesta), men pumped up on bitterness, testosterone and short-fuse rage. There’s also trailer-dwelling trattoria worker Amelio (Gabriel Montesi) who fancies himself as an Antonio Banderas lookalike, and, while just as much of a musclehead as the other two, is also a devoted single dad to spindly loner Geremia (Justin Korovkin).

The episodic narrative takes in, among other strands, the relationship between shy pubescent Dennis (Tommaso di Cola) and Vilma (Ileana d’Ambra), a heavily pregnant teenager who works in the school canteen; Dennis’s nervous encounter with a younger female schoolmate who thinks she’s ready to seduce him; a local outbreak of bomb-making; and more troubling stuff besides. Thematic seams running throughout are a brand of male rage that the term ‘toxic masculinity’ doesn’t begin to cover, and the sense that children’s chances are too often doomed from the start by baleful adult influences, whether that’s access to online porn or proximity to various malign forms of discontent.

Some of the adult performances are a little broad – Germano and Malatesta never quite properly distinguish their two shaven-templed lunks – and the women barely emerge into the foreground. But the children give terrific performances, whether it’s simply showing impeccable patience in melding, like portrait subjects, into the overall imagery, or real boldness in uncomfortable scenes (a hair-cutting moment, a tentative sexual encounter that’s both excruciating and comic). Towards the end, one character’s response to an utterly nightmarish discovery is handled with a boldness of staging that suggests directors with both intelligence and nerves of steel.

While Bad Tales richly evokes a very Italian, mainly working-class milieu, part of the film’s appeal lies in its adroit borrowing of a certain American realism: echoes of Californian or Texan summers, with hints of Boyhood or The Virgin Suicides, and in turn, those films’ channeling of the photographs of William Eggleston. DoP Paolo Carnera’s stylised imagery, sometimes laying on yellowish filters to heighten the oppressive mood, builds a self-enclosed claustrophobic universe. An effective, eccentric soundtrack mixes Italian pop, nerve-tweaking modern classical and the abundant chirping of crickets, all combining to play on the nerves and make the viewer sweat as much as some of these characters do.