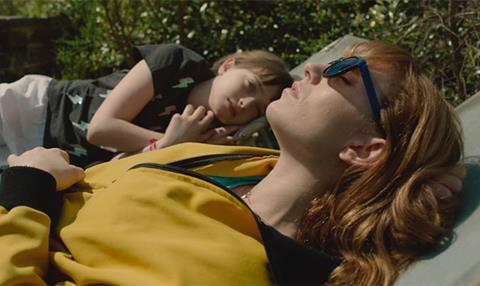 A very leisurely road movie with a diffuse itinerary, Barrage is noteworthy for its central performances. Lolita Chammah is gamely discombobulated as Catherine, who left Luxembourg without explanation and, now back without warning, wants to have a relationship with the 12-year-old daughter she left behind. Since Catherine’s mother Elisabeth (Chammah’s real-life mother, Isabelle Huppert) has been raising Alba (an outstanding Thémis Pauwels) for the past 10 years, the perhaps irreparable gaps and emotional obstacles are considerable.

Vaguely sinister from the outset, the film sustains a tense what’s-going-on vibe for much of its running time that viewers may find either compelling or irritating. The style is minimalist and meandering but does eventually add up to an unsettling portrait of three generations connected by blood if not affection.

However dilute Catherine’s maternal instincts may have been as a certainly too-young mother, she seems sincere about wanting to connect with her daughter. But Alba, who is following a strenuous training regime for an upcoming tennis tournament — with Elisabeth coaching her as it’s implied she coached Catherine — doesn’t welcome this unasked-for disruption of her routine one bit.

Potential viewers may be intrigued by the opportunity to see Huppert and Chammah in the same movie (close your eyes and Chammah’s voice sounds an awful lot like her mother’s) but it’s young Pauwels who gives the standout performance. Her reactions to the stange events unfolding around her are effortlessly convincing. She’s a little girl on the cusp of puberty but she’s also self-contained and emotionally resourceful in interesting ways. When her mother flushes some medication down the toilet — or tries to — Alba seems to have a better grasp of how plumbing works than pouty, impetuous Catherine. (For the record, Huppert and Chammah appeared together in Marc Fitoussi’s bittersweet comedy, “Copacabana,” in which Huppert played the space case and Chammah the grounded voice of reason.)

Chafing at how the reunion isn’t going as she planned, Catherine more or less kidnaps Alba in hopes of forming some sort of bond.

This is a very visual endeavor, with minimal talk. The first memorable snippet of dialogue takes place at the side of an improvised grave for a character whose departure casts a pall over the subsequent proceedings. The squarish 1:33 screen ratio contributes to the notion that Catherine and Alba are stuck with each other despite no shared frame of reference, but also registers as needlessly trendy.

The car journey offers everything from sunbathing and fresh water swimming to what seem to be snowflakes. This is a tale of females that could lead viewers to think that men are an afterthought in Luxembourg.