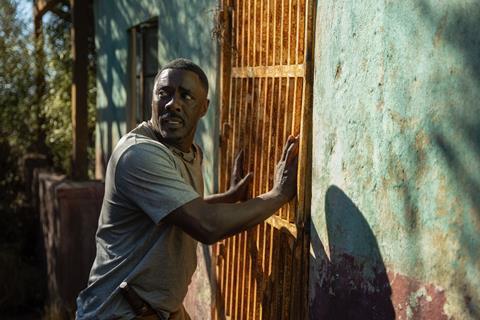 The lowkey survival thriller Beast casts Idris Elba as a grieving, flawed widower who must protect his daughters from a voracious lion, the story’s metaphorical themes of parenthood and the safeguarding of family as unsubtle as that big cat’s powerful jaws. Everest director Baltasar Kormakur crafts his man-versus-wild-animal drama with some niftily tense suspense sequences that split the difference between compelling and cheesy. But whether it’s the so-so CGI or the threadbare character development, Beast frustratingly refuses to aspire to be more than a competent, disposable actioner.

Elba is convincing as a man who rises to the challenge of facing down a lion determined to make a meal out of him.

Universal Pictures releases Beast on August 19 in the US, with the UK rollout the following Friday. Summer blockbuster season is long over, so soft grosses seem likely, despite Elba’s involvement. And while reviews should be fairly positive, the film may find just as welcoming a home on streaming — indeed, the picture’s modest ambitions should fit nicely on the small screen.

Elba plays Nate, a doctor who has taken his teen daughters Mare (Iyana Halley) and Norah (Leah Jeffries) on safari in South Africa, figuring they all need a getaway as they mourn the recent death of his wife (and their mother) from cancer. Joined by old friend Martin (Sharlto Copley), who runs the game reserve, Nate quickly realises how much his kids blame him for her death. (For one thing, Nate and his wife were separated before her passing — and he was always so busy with work that he didn’t make time for his family.) But after they are attacked by an especially aggressive lion, their vehicle badly damaged and their cellphones unable to get service, Nate will need to do everything he can to keep his girls alive.

In survival films such as The Grey and The Shallows, the main character is not just battling deadly predators but, also, wrestling with some unresolved trauma — usually involving the death of someone important to him or her. Beast blatantly copies this formula, introducing a dynamic in which Nate’s daughters are immediately distant, paving the way for a fraught life-or-death scenario in which he’ll square off with a terrifying animal and, ultimately, prove his worthiness as a father.

Elba certainly has the chops to make the character’s arc resonate. Nate starts off as an overeager parent trying to force a closeness with his children — his guilt and grief making him seem ineffectual and insincere. But once they’re stranded in the savannah — and the savvier Martin is mauled by the lion, unable to walk — this ordinary doctor will discover his primal side, with Elba convincing as a man who rises to the challenge of facing down a lion determined to make a meal out of them.

Although the effects that bring the animal to life are generally realistic, a certain amount of digital phoniness undercuts this creature’s raw fury. In Beast’s early stretches, the lion behaves believably, which makes its attacks on the family’s vehicle especially frightening. (What works so well initially is that we don’t see the animal but, instead, sense its proximity.) But the longer the lion is on screen, the less arresting and the more artificial it feels. It also doesn’t help that Beast eventually puts the predator in situations where it’s nearly a Terminator in its inexplicable ability to survive impossibly harrowing circumstances.

This is Kormakur’s first feature since 2018’s Adrift, a very different kind of survival picture, but as he’s demonstrated on 2 Guns and Contraband, he seems to have a fondness for a particular kind of popcorn-flick escapism that’s never especially taxing or original. Incorporating the occasional long take, which creates tension concerning when the lion might leap out as the camera restlessly moves through the scene, Kormakur tries to balance jump scares with an emotional story of a father seeking redemption. But the problem is that Nate isn’t particularly fleshed out, while his daughters tend to be little more than narrative barometers to measure how well their father is doing at earning back their respect.

As for Copley, he in some ways has it even worse than Halley and Jeffries, his Martin hobbled and left to suffer in agony so that Nate can be the film’s alpha male. Elba brings such a mournful quality to Nate, who is always uncertain but trying to stay calm in order to boost his terrified daughters’ spirits, that there’s a touching vulnerability to his character’s heroism. And despite how silly it comes across, watching him punch and kick this savage predator in the face does have its superficial pleasures. For a film that can otherwise feel a little too mechanical, it’s Elba who is the beating heart of Beast.