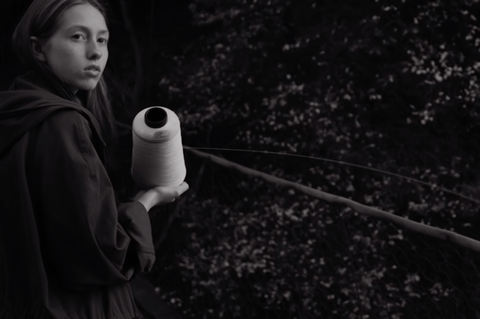 An impressionistic tale about a young Georgian woman returning to her village to tackle her demons in the very specific form of her recently deceased grandmother, Juja Dobrachkous’s debut Bebia, a mon seul desir has much to say, but seems uncertain about how to say it. Often captivating and beautifully observed on a scene-by-scene basis, as a whole it straddles awkwardly between the story of a young woman’s emotional journey and a quasi-documentary record of life in a remote Georgian community. The two strands never quite meld into a harmonious whole, leaving the impression of an ambitious, passionate director with a distinct sense of style whose ambition, on this occasion, has exceeded her grasp.

Intense and unsmiling, Ariadna (Anastasia Davidson), one of several characters whose name is informed by classical mythology, is working as a model in London when she is summoned back to her village after the death of her grandmother Medea (Guliko Gurgenidze): Bebia is ´grandmother’ in Georgian. On her return, still wearing her bandage after self-harming, Ariadna is starkly confronted by everything she’s trying to escape. Namely, she’s reacquainted with a society built on traditions unquestioningly followed, where the roles of men and women are rigidly divided and where, from her point of view, everyone is tremendously unhappy — not least her depressed, hard-drinking and unfailingly aggressive mother (Anastasia Chanturaia).

The old values are embodied in the figure of her grandmother, a tyrannical matriarch whose influence Ariadna has been seeking to escape. (As an index of character, Medea tellingly declares that the world would be better without children.) Her wake is one of the film’s fine set-pieces: as the black-clad women wail and scream around the coffin, Ariadna at first finds it ridiculous and laughs but is then overwhelmed by it all and starts to weep. Someone comes in and tells them to tone it down because they are upsetting the young woman. As a revelation of the personal and cultural struggles taking place inside Ariadna, the scene is unbeatable.

Local custom states that when someone dies away from home, a thread must be stretched from the place of death to the house so that the soul will not get lost on its way to Heaven. This idea sounds poetical to western ears, but Ariadna, having unwillingly submitted to the task, finds that the practicalities of running a spool of thread across fifteen miles of Georgian countryside, in the company of unrealised love interest Temo (Alexander Glurjidze), are rather different. “This is the twenty-first century,’ she cries in the middle of a raging thunderstorm, far now from the catwalks. “Why do I have to do this?”

A film about the clash of two worlds unfolding inside a fragile young woman, Bebia could have made for an intensely emotional viewing experience. But for several reasons, Dobrachkous’s directorial style doesn’t allow the viewer to share in what Ariadna is going through. Firstly, Bebia is shot in a cinematically ‘timeless’ black and white which, although it often looks magnificent, keeps the action at a stylistic remove — an effect that is heightened by the decision to frame the characters so their heads often aren’t visible. This strategy can be striking, allowing Veronika Solovyeva’s camera to pick up wonderful telling details as it roams nervously around a scene, but again the style blocks access to the experience.

Secondly, Bebia somewhat randomly shuttles between Ariadna’s present day and her childhood but without creating clear links between the two, so that cumulative emotional power is lost. The viewer spends a lot of time admiring the undoubted virtuosity of standalone scenes but is unable to fit them into the bigger picture of who Ariadna has become. We witness many key moments from Ariadna’s life, but at the end she is pretty much the same person as she was at the start, having come to no deeper understanding. Explanation is sacrificed on the altar of evocativeness, and the viewer stays in the dark about how a girl from a remote rural village in Georgia might have ended up becoming a model in London.

As a record of life in a rural Georgian community, Bebia strikes the right balance between affection and irony. The conversations among the old men at Medea’s graveside are almost too-perfect repositories of quotable wisdom, some of it hilarious. “Music was better in the old days,” one old-timer observes, ”when ugly people were allowed to sing,” while another points out that “Self-harm is fashionable in the West.” A community from which the young have vanished, it is obsessed by, and revels in, death: the only response to it all is a bitter, dark humour which Bebia, a mon seul desir transmits to perfection.