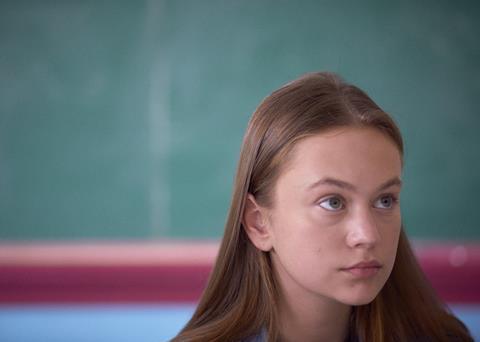 The lives of a disillusioned teenage girl and an isolated man teetering on the edge of psychosis seem destined to collide in this intriguing feature debut from Canadian writer-director Nicole Dorsey. With strong performances and an arresting tone, Black Conflux doesn’t offer anything groundbreaking in terms of its narrative, but is nevertheless a striking calling card for its talented maker.

With its determinedly unhurried pace, it doesn’t so much crackle with tension as hum with inevitability.

Rich in 1980s period and geographical detail, the film is likely to garner further festival interest following its world premiere in Toronto’s Discovery strand, although it could prove too much of a slow burn to make an impact outside domestic commercial distribution.

In 1980s Newfoundland, 15-year-old Jackie (Ella Ballentine) is straddling the divide between childhood and adulthood with shaky legs. She is desperate to join the school choir and do well in class, but is also beguiled by worldly best friend Amber (Olivia Scriven), with whom she smokes weed, attends parties, hitchhikes with abandon and explores relationships with boys. Initially enjoying the freedom that this lifestyle seems to offer, and unchecked by the alcoholic aunt with whom she lives, Jackie soon comes to realise that giving up her independence to fit in with the crowd may be too high a price to pay.

In the same small town, 28-year-old social misfit Dennis (Ryan McDonald) is also struggling to fit in. Working at the local beer factory and living with his sister, he often finds himself the butt of jokes that fuel his growing anger and disassociation. Past tragedies are hinted at in snatches of conversation and dream sequences. Disappearing into his own fantasy world, which is populated by spectres of women he has loved or admired (usually from afar), Dennis begins to seriously consider acting on the violent fantasies that he struggles to keep hidden.

As character studies go, Black Conflux is expertly-observed, even if it is cut from familiar cinematic cloth. Jackie’s coming-of-age tale hits all the familiar beats — experimentations with drink and drugs, pushing the boundaries of her sexual experience — yet Ballentine’s low-key performance is more about accessing the inner vulnerability then the outer wild child. As the increasingly unhinged Dennis, McDonald leads towards the extreme, yet he is also fuelled by a sense of loneliness and abandonment, an unrealised desire for a conventional, happy life. That even his fantasy women turn on him, berating him for being weak and ineffectual, shows the depth of his own self-loathing.

The absence of parental guidance or care is not the only tie that binds Dennis and Jackie. Both could be seen to be victims of toxic masculinity; Jackie explicitly so, in the way she is treated by boys she thinks she can trust and, more abstractly, Dennis’s attempts to be the type of alpha male that, he believes, will finally earn him some respect. As their paths cross in parking lots and shopping malls, and they move closer to each other in ever decreasing circles, the film plays like a preamble to tragedy; a bold concept in cinema, which usually deals with the aftermath of such events. Yet, with its determinedly unhurried pace, it doesn’t so much crackle with tension as hum with inevitability.

Where Black Conflux really shines is in its craft. Cinematography, from Marie Davignon captures the intimate, unhurried movements of insects, the wide-screen torrent of two rivers becoming one; effective visual motifs which underscore the film’s narrative themes. Sound design by Paul Col is excellent; the blending of natural sounds into man-made ones, such as the squeal of a seagull becoming the squawk of an alarm clock, offering a particularly neat aural shorthand for life in this remote small town, where beautiful scenery can hide ugly thoughts and deed, and even the most inconsequential of choices can have a life-changing impact.