“The sort of inept, forgettable disaster that doesn’t even induce so-bad-it’s-good chuckles” 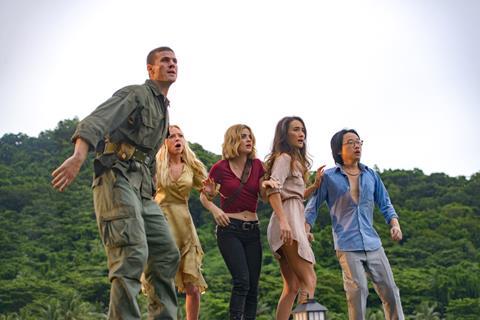 Dreams don’t come true in Blumhouse’s Fantasy Island, an interminable horror-thriller that squanders a potentially rich premise on a series of increasingly preposterous plot twists and a collection of nightmarishly dumb characters. Based on the popular television series about a supernatural resort that makes its visitors’ deepest desires reality, the film attempts to be a cautionary tale about the dangers of getting what you wish for, but the execution is both obvious and uninspired. Despite the presence of usually dependable actors such as Michael Pena and Maggie Q, Fantasy Island is the sort of inept, forgettable disaster that doesn’t even induce so-bad-it’s-good chuckles.

That grim sense of feeling trapped is just as palpable for anyone stuck watching the film.

Sony will unveil Fantasy Island on February 14 in the States and March 6 in the UK, hoping that the Blumhouse name can counteract the inevitable bad reviews. Audience familiarity with the series, which ran from 1977 to 1984, should help, as will the fact that the movie is rated PG-13 in the US (it received a 15 certificate in the UK), which widens the possible viewership. But the studio probably shouldn’t start fantasising about huge grosses.

As the film begins, we meet a group of disparate individuals — including the flirty Melanie (Lucy Hale) and reserved Gwen (Maggie Q) — who have all won a contest in which they are whisked away to Fantasy Island, where they’re told by the proprietor, Mr. Roarke (Pena), that they’ll each have one fantasy magically granted. However, there are two caveats: the fantasy cannot be altered after it has been requested, and it must play out to its logical conclusion. The tourists are so taken by the island’s beauty that they’re not concerned, but soon their wishes start having unexpected consequences.

In an era of immersive theatre, escape rooms and virtual reality, Fantasy Island seems poised to be a dark commentary on our seemingly endless craving for intense interactive entertainment. (The contest winners assume that the island’s elaborate re-creations of their fantasies are being staged by hired actors or holograms to make them seem more realistic.) But anyone who’s seen HBO’s Westworld can guess that Roarke’s tropical resort isn’t quite the hedonistic getaway these naïve individuals believe. As with the original series, the new Fantasy Island involves the granting of wishes, albeit perhaps not entirely as the tourists imagined — however, this time the life lessons prove deadly.

Director and co-writer Jeff Wadlow, who previously helmed the Blumhouse horror film Truth Or Dare, sets up this scenario with enough foreboding that we, unlike the vacationers, know that bad things are about to happen. But Fantasy Island quickly loses momentum once it becomes clear that the characters’ fantasies are pretty mundane. Melanie, for instance, wants revenge on a childhood classmate, Sloane (Portia Doubleday), who bullied her, but she discovers that wanting the woman to suffer only results in mild torture-porn frights. (The film’s lack of gore isn’t helped by the equally deficient amounts of scares and suspense.) Similarly, Melanie’s cohorts are holding onto regrets and painful secrets, which play out in predictably ironic ways once the island gets a hold of these repressed feelings.

A film like this is packed with mysteries, inviting viewers to see if they can solve them. For instance, how is the island able to bring these people’s desires to life? Is Roarke pulling the strings? And if not him, who? Wadlow’s answers are irritatingly convoluted. (Plus, even after Fantasy Island establishes its narrative ground rules, the filmmakers arbitrarily adjust them to serve their purposes.) Repeatedly, the film throws in additional farfetched surprises and red herrings, building toward a gotcha ending that’s meant to be shocking. Instead, it mostly proves to be forced and ridiculous.

Taking the reins from Ricardo Montalban, who played the island’s enigmatic steward in the original series, Pena tries to have a little fun with his character’s coy evasiveness, speaking in teasing half-truths to his guests. But the absurdity of the plot forces the actor to behave ludicrously. Maggie Q is probably the strongest of the ensemble simply because Gwen is less hysterical than her fellow tourists, who are dimwits too slow to realise that this earthly paradise is actually a death trap. That grim sense of feeling trapped is just as palpable for anyone stuck watching the film.