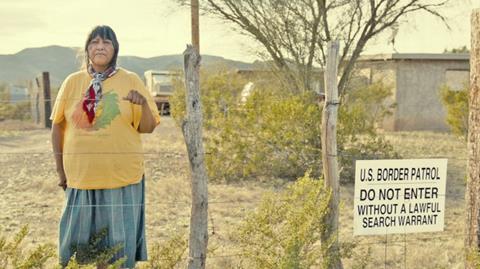 There is always room for further dispatches from the US-Mexico border; although Gudrun Gruber’s small-scale documentary, which premiered at the Zurich Film Festival, doesn’t carry the heft of so many previous films about this issue, it has highly salient points to make on the effects of the wall on the communities in Arizona who are forced to live in and around it.

There’s almost a traffic jam as NGOs rub vehicles with the border patrol, state troopers, militias (who won’t describe themselves as such) and the local sheriffs

Best viewed with a base knowledge of the problems facing the area and the citizens of the two countries split by it, Borderland Blues adds a quirky and gently probing note to some devastating work which has come before it, most notably 2013’s drama-doc Who Is Dayani Cristal? Borderland Blues should sit well in any debate on the issue, particularly on the festival circuit, but at 73 minutes, this documentary will work best on the small screen.

Gruber’s film, so eloquently shot with a palpable sense of scale by Bernd Effenberger, gives a strong sense of the vast scrubland that the US/Mexico border occupies. Not only is the line seemingly un-patrollable, it’s also arbitrary – the wall runs around a giant cactus which “must not have had US papers,” says one resident drily. Arizona is the original Wild West, where, over in Tombstone, Wyatt Earp took part in the gunfight at the OK Corral, now memorably re-enacted by stiff motorised mannequins. The “border” has always been fluid, and parts of the territory now in the US once belonged to Mexico; it was the hunting ground of the Apache tribe and parts of the Tohono O’odham First Nation Reservation actually straddles the border, paralysing its residents.

And today, it feels like the Wild West all over again: there’s almost a traffic jam as NGOs rub vehicles with the border patrol, state troopers, militias (who won’t describe themselves as such) and the local sheriffs. Aid workers leave out water and food for the Mexican migrants who try to make the hazardous journey across the inhospitable terrain – the number of deaths is disputed, but they avarage 300 a year and certainly the tally runs to many thousands. Militia members slash the containers open. “Coyotes” smuggle people and drugs by night, and the cartels maintain a watchful presence. Now, to complicate matters, there’s the issue of terrorism along this most porous of borders.

Gruber shows how the local residents have been caught up in the armed surveillance. Giant towers watch over them, cameras follow their every move from the ground and blimps look on from above (the whole zone is a business; Gruber shoots scenes from the Border Security Expo). And illegal immigrants turn up on their doorsteps, bloodied and lost. They’re advised to defend themselves; it’s a watchful, stifling environment in which to live, caught between special interests, whether they be the mysterious “Arizona Border Recon” or “No More Deaths”. And although she doesn’t interview any migrants, their unspoken plight - signified by clothing, shoes, abandoned rucksacks - looms large and eloquently over Gruber’s compact doc.