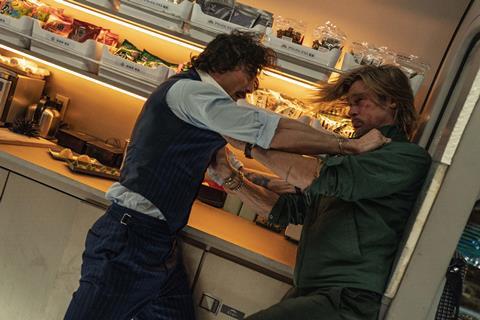 Bullet Train recklessly barrels down the tracks, always at top speed, constantly threatening to go right off the rails. This self-consciously hip action-comedy is bolstered by a game cast led by Brad Pitt, but far too often director David Leitch indulges in a pseudo-Tarantino mix of outlandish violence and quirky character beats, resulting in a lot of strained irreverence that can’t quite hide its lack of originality. Based on Kotaro Isaka’s 2010 novel, the film takes place almost entirely on a Japanese train populated by assassins, tough guys, crooks, even a venomous snake. But for all its manic forward propulsion, the story really doesn’t go anywhere.

A rogues’ gallery of lovable weirdoes

Sony unveils Bullet Train on August 3 in the UK; the US follows two days later. The colourful ensemble around Pitt includes Joey King, Aaron Taylor-Johnson and Brian Tyree Henry — not to mention at least one surprise superstar cameo — and fans of Leitch, who helmed the high-octane Deadpool 2 and Hobbs & Shaw, will certainly hop onboard for this picture’s nonstop energy. But with summer starting to fade, Bullet Train may not enjoy the same robust grosses as the season’s earlier, more IP-friendly action offerings.

Pitt plays Ladybug, a hitman who is trying to live a more mindful existence, which is why he has agreed to do what seems like a pretty straightforward, low-risk job: board a train in Tokyo: steal a specific briefcase, and get off at the next stop. But the assassins tasked with safeguarding the briefcase, Tangerine (Taylor-Johnson) and Lemon (Henry), give chase, their paths crossing with that of a seemingly innocent young passenger, The Prince (King), who is being targeted by a separate assassin, the mournful Kimura (Andrew Koji).

Incorporating flashbacks that provide necessary context for how all these disparate characters ended up on the same train, the film sports a breezy insolence, revelling in the heightened, almost cartoonish reality in which the protagonists find themselves. Whether sporting flagrant accents or bizarre personality traits, Bullet Train’s denizens are a rogues’ gallery of lovable weirdoes, with Leitch delighting in watching them bounce off each other — sometimes literally — as they’re trapped on the same fast-moving transport.

Portraying an assassin who is committed to his personal growth — Ladybug keeps earnestly quoting his therapist’s self-help bromides — Pitt does his best to make his cliched character endearing. The Oscar-winner doesn’t dial up the silliness as high as he did in such films as Snatch and Burn After Reading, instead making Ladybug a world-weary enforcer who just wants to get his assignment over as quickly and cleanly as possible. Occasionally, Ladybug’s “hitman trying to turn over a new leaf” joke lands, but Bullet Train forces this musty comedic trope badly, just as it oversells other characters’ shtick. (The Prince may seem sweet and wholesome, but of course she’s not. Meanwhile, Lemon has based his entire worldview on Thomas The Tank Engine, an initially clever conceit that gets tiresome quickly.)

A former stunt coordinator and fight choreographer, Leitch supplies Bullet Train with myriad adrenalised action sequences, which often take place in close quarters as Ladybug and his enemies battle it out for the briefcase and its mysterious contents. The punching, kicking and infrequent gunplay are all enthusiastically executed — it’s especially rewarding to see Hiroyuki Sanada put in an appearance near the end of the picture — and yet the fight scenes lack much inspiration, never achieving the dizzying, demented heights of Leitch’s previous work. The characters often feel like retreads of familiar underworld figures from B-movies, while there’s not much rooting interest in the action sequences, which pit one stereotypical criminal lowlife against another.

There are twists in terms of precisely why certain individuals are on the train — and how they relate to Ladybug’s mission — and Bullet Train reaches for a little emotional resonance in unexpected places. (Taylor-Johnson and Henry don’t just play partners but also brothers, their drab bickering giving way to surprising tenderness.) Big names pop up in brief roles, chiefly to get a laugh out of the audience because one wouldn’t anticipate they’d sign up for such intentionally tiny parts. And Leitch keeps teasing the possibility that a freed poisonous serpent is slithering somewhere aboard that speeding train, waiting to strike at any moment.

Bullet Train has no shortage of giddy, madcap gusto, hoping to satiate hardcore genre fans with its bloody, over-the-top violence and rising body count. But this lumbering locomotive proves to be neither hilariously amoral nor liberatingly violent — it makes quite a commotion, but mostly just spins its wheels.

Screenplay: Zak Olkewicz, based on the book by Kotaro Isaka