Two Egyptian women find themselves thrown out onto the busy streets of Cairo. 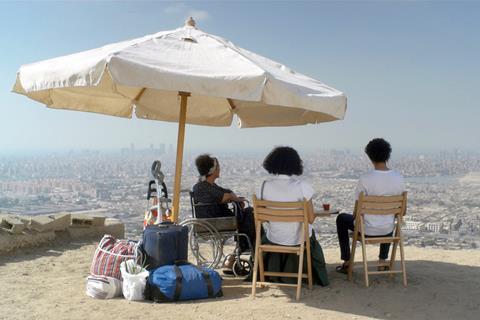 As two very different Egyptian women find themselves thrown out of their apartment block onto the busy streets of Cairo, writer-director Hala Elkoussy’s handsomely mounted feature debut drama uses their plight to delve into both a reflection on the city and modern-day Egypt and also ruminate on the nature of family and friendship.

Director Hala Elkoussy, whose video art has been exhibited in Amsterdam’s Stedelijk Museum, has crafted a gently melancholic film that essentially is about friendship.

Balancing magical realism with wistful drama, this tender film is given heart and soul thanks to the lead performances by Salma Samy and Menha Batraoui whose supportive friendship leads them on thoughtful journey. The poetic sentimentality might make it a tough sell for certain audiences, but locally it could easily strike a chord, especially for older viewers.

The film opens with an artistic and languid flashback to the childhood of Aida (Salma Samy) as she poses for a photograph for her mother, who them promptly drives away. As a 33 year-old adult she is an actress (or, as she describes herself, “an aspiring actress for 10 years”) who goes through a series of auditions, and struggles to make money to pay her rent.

When her 70 year-old neighbour Samiha (Menha Batraoui), an aging diva, hurts her leg in a fall at her flat, Aida and 20 year-old Yassin (Marwan Alazab), who lives nearby help get her to hospital. When they return, their apartment block has been flooded and Aida and Samiha are blamed and soon find themselves thrown out of the building.

They end up crisscrossing a bustling and times threatening Cairo in taxis, looking for a safe place to spend the night. Over the coming days their trials and tribulations lead them to estranged family members (as Aida reunites with her mother and Samiha visits the sister she has lost contact with) and former friends and lovers. These meetings are often shown as colourful and dreamy intermezzos with music and dance, highlighted by bright and colourful costumes that link to the poetic nature of some of the sequences.

Director Hala Elkoussy, whose video art has been exhibited in Amsterdam’s Stedelijk Museum, has crafted a gently melancholic film that essentially is about friendship. Salma Samy is an elegant lead who juggles feisty optimism with a sense of lingering mournfulness, while Menha Batraoui’s Samiha is brimming with resilience and determination while also clinging to memories of a life well lived.