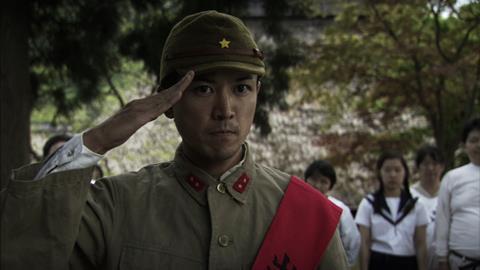 An eloquent, grimly ironic anti-war film, Caterpillar is adapted from a story by Edogawa Rampo which was banned by the censors shortly before Japan entered the Second World War due to its “defeatist” tone. Low budget but high-quality, it looks amazingly smooth for a film which was shot in 12 days and edited in 13 hours. Intellectually and politically faultless, Caterpillar is perhaps too careful to be fully involving, although arthouse and festival audiences will appreciate its unflinching take on Japanese society at that time.

Maimed Lieutenant Kyuzo Kurokawa (Ohnishi) arrives back in his village from the Second Sino-Japanese War in 1940 with no hands or feet and his face completely disfigured. He cannot speak and there is some doubt over whether he can hear or comprehend what is being said to him. But he has three decorations and to the villagers he is a national hero, an inspirational symbol of heroic sacrifice for homeland and the Emperor.

For his wife, Shigeko (Terajima), however, he is a burden she will have to bear for as long as he lives. It is her duty, everybody tells her, to take care of the hero, and being a dutiful wife, she accepts. Most of Caterpillar is dedicated to this couple’s strange marital life as he assertively demands his needs, whether it be sex or food, with fiercely expressive eye movements and animal grunts. Wakamatsu, a star director of “pink movies” in the sixties, delivers graphic sex scenes between the mutilated Kyozo and his wife, enhanced by the very successful prosthetic work to make Ohnishi look like a human “caterpillar”.

As if to mirror the fate of Japan, which enters the world war at around the time Kyuzo returns home, the human “caterpillar’s” conduct gradually changes. His initial aggressiveness gives way to nightmares which invade his subconscious, while guilt replaces the heroic pride that had previously sustained him. At the same time, Shigero’s patience finally wears out and with it, her meek resignation.

Wakamatsu painstakingly dissects this relationship, underlining it with the gloating propaganda on the radio and the pomp of every single village ceremony. A jarring dramatic note is the fact that Kyuzo’s family practically disappears after the first sequence, with the exception of his sickly brother who is ashamed of not having been drafted into the army. But when it comes to showing the glorious Japanese army as a gang of rapists and arsonists, however, the film doesn’t flinch. Wakamatsu pulls no punches in depicting the Japanese man, even in his most reduced condition, as an unrepentant chauvinist for whom women are machines for preparing food and making boy babies.

Using some documentary war footage to enhance the authenticity of his war scenes, Wakamatsu has once again proved that low budget is no excuse for poor quality. Luckily, he found two ideal performers to carry his film. Shima Ohnishi, in an almost impossible role, expresses mutely through his eyes more than most actors could manage with their entire bodies. And Shinobu Terajima is utterly convincing as a docile peasant who keeps her emotions bottled up for the greatest part of the film, conveying her emotions through barely noticeable semitones.