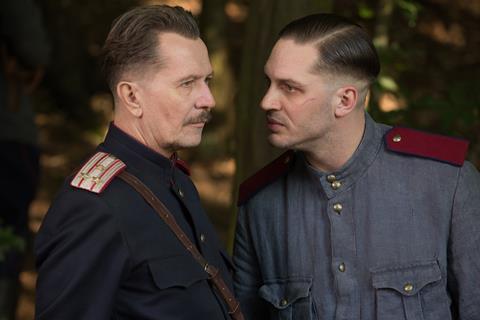 The film struggles to do justice to all its different elements, and the hunt for the serial killer often feels sidelined in favour of less compelling material

The combination of the successful source material, an A-list cast (Hardy, Gary Oldman, Noomi Rapace, Paddy Considine etc) and the unusual setting should help position the film as a mid-range thriller for those who like the visceral attractions of violence and bloodshed balanced with the more cerebral pleasures of political intrigue and detective work. Rolling out internationally from April 15, Child 44’s commercial chances may also be boosted by Tom Hardy fans who could welcome it as an aperitif before the main course of Mad Max next month.

Hardy’s fully committed central performance is the film’s greatest asset. Like every member of the English-speaking international cast, he sports an acceptable ‘Russian’ accent. It is the combination of his swaggering physical presence and emotional torment that lends complete conviction to the character of Leo Demidov. He provides the audience with an unwavering human connection throughout a hectic plot in which other characters are shortchanged and some situations remain underdeveloped.

Demidov is originally a Ukrainian orphan who reinvents himself as a Soviet hero photographed raising a Russian flag over the vanquished Reichstag in 1945. Eight years later, he is a ruthless, uncritical arm of the Soviet system, rooting out corruption and punishing opposition. The film begins with a title declaring “there is no murder in paradise” and it becomes an oft-repeated mantra, accumulating layers of irony as Demidov is faced with the kind of crimes and misdemeanours that officially cannot exist in this glorious worker’s state.

Demidov’s loyalty to the system is tested when his best friend’s son is found dead by a railway track. A report concludes that he was the victim of a tragic accident despite the fact he was found naked with inexplicable injuries. Murder is strictly a capitalist crime so the official version of events must stand. Demidov’s decision to investigate finds him demoted and exiled to Volsk under the watchful eye of General Nesterov (an underemployed Gary Oldman). Evidence of further child murders emerges forcing Demidov to risk his life in an attempt to identify and apprehend the killer.

Child 44 rattles along, establishing Demidov’s integrity and compassion and painting an intriguing picture of a society in which nobody can be trusted and everyone is obliged to cover their tracks. A further side plot explores Demidov’s concerns about a wife, Raisa (Noomi Rapace), whom he suspects of infidelity or treason or even both.

The film struggles to do justice to all its different elements.  The hunt for the serial killer often feels sidelined in favour of less compelling material, including the bitter vendetta of Demidov’s aggrieved colleague Vasili (Joel Kinnaman). The identity of the killer is revealed around the two-thirds mark but the character is never sufficiently developed to help transform the film into a tense cat and mouse tussle. The final chase and confrontation feel rushed, as if there is an urgency to wrap everything up and keep the running time to a manageable length. Ultimately, the impression remains that Child 44 either needed to be much longer to let all the different elements breathe or much more tightly focused to let the murder manhunt dominate.

Screenplay: Richard Price from the novel by Tom Rob Smith