An arresting, troubling investigative work into the death in 1961 of the UN Secretary General 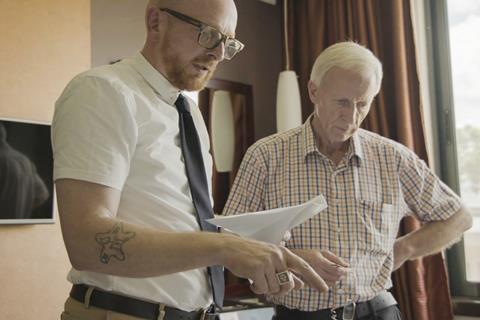 Fact proves stranger than fiction, or at least disconcertingly close to it, in Cold Case Hammarskjöld, a category-defying investigative documentary that’s also a playfully self-reflexive essay on political truth and the difficulty of establishing it.If this latest work by Danish documentarist Mads Brügger often strikes a wilfully eccentric register, it’s because the information he unearths is so disturbing in its repercussions that grim laughter might seem the only sane response.

This cold case should prove a hot item indeed

The film starts as an investigation into the death in a 1961 plane crash of Swedish diplomat Dag Hammarskjöld, Secretary General of the United Nations. But the can of worms that Brügger opens up, in collaboration with Swedish investigator Göran Björkdahl, surpasses the most byzantine inventions of John Le Carré or Frederick Forsyth. The film’s revelations may seem at odds with the manner of its delivery, in which – as per previous feature The Ambassador (2011) - Brügger casts himself prominently as gonzo investigator. Both content and approach will make for intense debate on the festival circuit where, following its Sundance premiere, this cold case should prove a hot item indeed.

The film begins with one of several black and white animation sequences, the first evoking the crash of Hammarskjöld’s plane near Ndola, Zambia (then Northern Rhodesia). Hammarskjöld was flying there to help resolve the crisis involving Katanga, a breakaway state from the-then Republic of the Congo. The diplomat, Brügger notes, was an idealist whose support for African independence alienated world powers including Britain and the USSR. Might he actually have been murdered by powerful political enemies? And why, among many enigmas surrounding the crash, did one photo of Hammarskjöld’s body show a playing card tucked into his collar?

Brügger introduces us to Björkdhal, who had started to investigate the case because his father, a UN diplomat, had visited the crash site and found what he thought might be ‘smoking gun’ clue to a conspiracy. Teaming up, Bjorkdhal and Brügger eventually discover something much more complex and extensive. It turns out to involve the mysterious South African Institute for Marine Research (SAIMR), seemingly a paramilitary body with a navy-style uniform, run by one Keith Maxwell – who, despite not actually being a doctor, ran a number of clinics for impoverished black South Africans.

Pursuing various leads, including an attempt to dig up the remains of Hammarskjöld’s plane, Bjorkhdahl and Brugger find every trail leading back to SAIMR. The investigation seems to hit a dead end, until – in one of the apparent digressions that are part of Brügger’s storytelling style – we hear about the murder in 1990 of a young scientist named Dagmar Feil. Eventually one Alexander Jones agrees to blow the whistle very comprehensively on SAIMR, to mind-blowing effect. Beyond evidence of a conspiracy to murder Hammarskjöld, it turns out that Brügger and Bjorkdahl have unearthed something bigger and nastier - a story of white supremacist militancy, corporate greed, international government machinations and the secret history of Aids in Africa.

Perhaps to encourage us to take a detached, sceptical position towards his findings, Brügger takes a highly self-referential approach. He pitches the film as a true-crime narrative, from its hard-boiled title to the chapter headings adorning the walls of two African hotel rooms, where Brügger dictates the story to two female secretaries (Clarinah Mfengu and Saphir Wenzi Mabanza). The film’s most problematic aspect is the sight of Brügger ‘whitemansplaining’ to these two women, who intermittently comment and ask questions. It’s part of his somewhat satirical stance, with Brügger – a nervy, sometimes hectoring figure – dressing in navy whites to echo his arch-villain, Maxwell. He also knowingly plays up the colonialist image by providing himself and a bemused Bjorkdhal with pith helmets “to protect our Scandinavian skin”.

Cold Case Hammarskjold unearths such a tissue of lies and prevarications that arguably it is only by offering this heady cocktail of fact, fictionalising and conjecture that some perspective on truth can be achieved. Brügger’s methods invite controversy, but there’s plenty of strong meat offered by an investigation that, the film reveals, Bjorkdahl is still pursuing. However sceptical you feel about Brügger’s approach, and his findings, this is an arresting, troubling work – and, for all the horror, an intensely entertaining one too.