Anthony Scott Burns impresses with his follow-up to ‘Our House’ 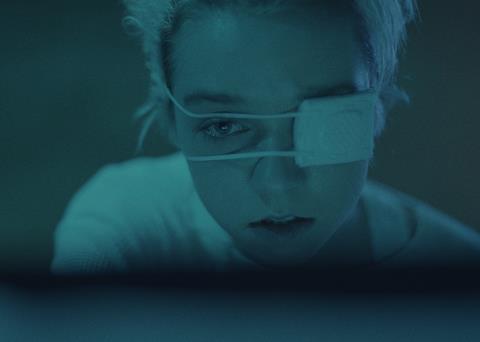 Come True is a smart sci-fi horror film that starts off with a familiar premise — a troubled teenager volunteers for a seemingly innocent sleep study — but keeps finding unique ways to explore the foreboding labyrinth that is the subconscious. A masterful display of tonal control, Anthony Scott Burns’ second feature lulls the viewer into an unsettling, trancelike mood, and then accents it with sharp characters and an unpredictable narrative arc. More atmospheric than focused on jump scares — which isn’t to say the film isn’t supremely unnerving when it chooses to be — Come True recalls past horror auteurs but suggests that this Canadian filmmaker has his own spooky, slow-burn rhythm.

The film premieres at Fantasia, which was also the launchpad for Burns’ debut, 2018’s Our House. A superb performance from Julia Sarah Stone as the young woman whose nightmares may become part of her waking life should help Come True perform well on the genre festival circuit, with notices focusing on the film’s impressive low-budget effects and nicely modulated tension.

Stone plays Sarah, an 18 year-old who, for reasons that are left intriguingly opaque, sleeps at a local playground rather than the same house as her mother. Plagued by bad dreams and constantly nodding off in class — half a dozen cups of coffee do little to help — Sarah finds out about a university sleep experiment which is looking for volunteers. For a few weeks, she will be monitored at night, high-tech gear attached to her head so that the college students can analyse her nocturnal brainwaves.

Because Come True is a horror film, viewers can rest assured that this experiment isn’t all it appears — and that something sinister may emerge from Sarah’s nightly visions. Our first hint of possible menace comes when she meets a shy, handsome man in a bookstore, Riff (Landon Liboiron) — only to run into him again randomly at a movie theatre. What Riff has to do with the larger story is a mystery Burns chooses not to reveal immediately, but suffice to say he has an unexpected connection to the sleep study — and that even when it is revealed what this is actually chronicling, that’s not the end of Come True’s twists.

Beyond writing and directing the film, Burns serves as cinematographer and editor as well. (He also co-wrote the score under his pseudonym Pilotpriest.) Perhaps not surprisingly, then, Come True feels like a singular, personal vision, as Burns drapes the scenes in bleached-out colours and fluorescent lights which make Sarah look spiritually unwell. Because Come True never elucidates her family troubles, we’re left to speculate, but Stone’s haunted expression hints at deeper psychological issues. After initially being wary of Riff, she forms a tentative bond with him, and the two actors capably play characters who seem broken. The question is whether this sleep study holds the key to her rejuvenation — or if it might lead to her ruin.

Despite modest means, Come True does an excellent job visualising Sarah’s subconscious. Minimalist design, low lighting and evocative sights — including corpses floating in mid-air — hint at the murky abyss of our minds without lingering too long on any one image. Eventually, though, a recurring figure will emerge, but Burns uses it sparingly so that the shock never dissipates.

As Sarah and the audience try to figure out precisely what is going on, the worry is that once Come True divulges its intentions, an inevitable letdown will ensue. Instead, the opposite proves true. Although Burns references George A. Romero and The Shining — and his score echoes John Carpenter’s icy synthesisers — his film is more intimate and emotional than those horror touchstones, and so the whys of the plot ultimately aren’t so important.

There’s hardly any blood in Come True, but the fragility of the characters suggests a world in which no one feels safe either awake or asleep. Burns builds to a dynamic ending — tying together ideas and plot points we’d forgotten — while providing Come True’s biggest chills. While the final resolution may feel a little unearned and gimmicky, its a rare misstep for a film that largely works like a dream.