An app which tells the time of your death; a film that struggles to do much with its concept 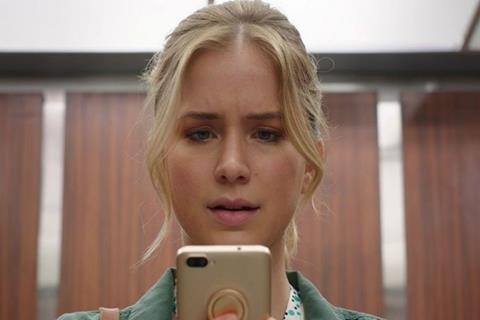 Mindlessly scrolling around on your phone for 90 minutes might prove more entertaining than watching Countdown, a very silly horror movie about an app that tells its users the exact moment they will die. That’s a mildly clever premise, but writer-director Justin Dec fails to do much with it, stranding viewers in a perfunctory suspense tale in which dull jump scares outnumber genuine moments of terror to an alarming degree.

Haunting theatres in the UK and US on October 25, this STX release hopes to capitalize on the upcoming Hallowe’en weekend, although the film could face some competition from the still-potent Joker and the horror-comedy Zombieland: Double Tap. A lack of star power may hamstring Countdown, but the film’s novel, zeitgeist-y hook should attract plenty of younger viewers.

Elizabeth Lail plays Quinn, a sunny, dedicated nurse who hears about a peculiar new smartphone app called “Countdown”, which consists of a digital countdown clock that lists how much time you have until your death. At first, it just seems like a simple, albeit ominous diversion, but when people around Quinn start dying at the exact moment that “Countdown” predicted, she begins to worry — especially because she has downloaded the app, and it indicates she’ll be dead in about two days.

Making his feature debut, Dec initially tantalises us with his queasy concept: there seems to be no reason why the app should actually know people’s expiration date, and yet it proves disturbingly reliable, forcing Quinn into a lethal game of beat-the-clock. Unfortunately, though, Countdown quickly runs out of inspiration, ignoring the storyline’s darkly humorous implications and instead settling for repetitious scenes in which she tries (and fails) to stop the countdown — deleting the app, buying a new phone, hacking into the program — or is tormented by visions of a generically looming shadowy form. As soon as it is established that the app is a legitimate harbinger of doom, the film’s tension dwindles: we know that most of Countdown is merely marking time until Quinn’s death clock reaches its final minutes at the story’s conclusion.

Lail is a warm presence as a sweet person who, predictably, is carrying a painful secret — a secret that, naturally, ties into Quinn’s ordeal over the course of the picture. The actress has a nice rapport with Jordan Calloway, playing a sympathetic stranger who has also downloaded the app, but there’s not enough screen time to get us invested in what becomes a strained, cheesy romantic subplot. (Talith Bateman, playing Quinn’s indignant younger sibling Jordan, mostly screams and cries on command, while PJ Byrne serves as Countdown’s wan comic relief, playing a priest who is inordinately excited about demonic possessions.)

It is customary in horror films to introduce a supernatural, unexplainable menace and then watch as the characters deduce precisely what is going on — and how they can stop it. Countdown follows that formula, but the revelations regarding this devilish app don’t turn out to be very satisfying or thematically rich. Without spoiling anything, suffice it to say that Quinn won’t just have to defeat whatever is behind the app but, also, finally confront the trauma she has long avoided. But the old-school horror explanations seem insufficient for such a 21st-century curse — Dec barely bothers to exploit our collective anxiety that we have become slaves to our phones — and the gnarly paranormal figures that emerge are far less frightening than the many comparable ghouls we’ve seen in other films.

Eventually, Countdown attempts to inject a philosophical note into the proceedings, questioning our interest in an app like this: why are people so obsessed with knowing when they’ll die? That’s an intriguing question, but a film this meagre — which mostly recycles familiar scare tactics and gives us characters who act like dolts just to further the plot — doesn’t have the ingenuity to make such musings thought-provoking. The downside to a film that includes multiple shots of a clock counting down is that it provides audiences with an unintended rooting interest: we’re just hoping it gets to zero soon so we can leave the theatre.