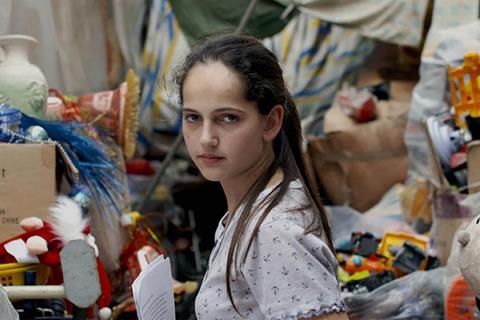 The bleakness of reality is nothing to sing about in Crater, but it does furnish a poignant slice of neo-realism by Italian documentarians turned debut feature helmers Silvia Luzi and Luca Bellino. Carrying their factual backgrounds into fiction, the writing, directing, producing, shooting and editing duo craft an intimate drama out of an the real-life experiences of a father and daughter.

After establishing their documentary credentials with 2008’s The Threat and 2012’s On the Art of War, there’s no doubting that Luzi and Bellino’s observant eyes remain Crater’s trump card, particularly in capturing the impressive performances of its non-professional, first-time leads, and in the filmmaker’s fondness for close-up-heavy camerawork. Their immersive, authentic efforts, and the festival attention garnered by their previous work, should go a long way towards helping the film secure further berths on the international circuit after its premiere in Venice Critics Week and special jury prize in Tokyo’s main competition.

With a basic premise reminiscent of other chasing-a-dream fare, including 2016’s fellow Italian title Indivisible (albeit with one aspiring singer, rather than a conjoined pair), Crater charts a Neapolitan family certain that music stardom is the means to a better life. Carnivals provide the stern Rosario (Rosario Caroccia) with a way of making ends meet, but he harbours grand plans for his attractive 13-year-old daughter Sharon (Sharon Caroccia). Already employing her vocal prowess to draw attention to his fairground stall, he sets about turning that talent into a folk music career — complete with a gruelling schedule of auditions and recording sessions, and just as demanding expectations of his potential star-in-the-making.

It should come as no surprise that the chasm between Rosario’s ambition-fuelled wishes and Sharon’s own desires for her future is vast, or that the seeds of rebellion start to blossom as the teenager becomes increasingly discontent with her situation. The more that her father’s obsession intensifies — displaying callousness in his attempts at motivation, and resorting to recording her every move via closed-circuit cameras within their house in an especially unsettling example of his fervent fascination — the more that she, understandably, begins to drift away.

Within the film’s concise 93-minute running time, Luzi and Bellino give ample room to the mundane minutiae of the Caroccias’ usual routine and to the spirit-crushing process of thrusting Sharon into the spotlight. Painstakingly scrubbing soft toys clean, ready to be spruiked as prizes to lure in customers, isn’t that far removed from carefully dressing and grooming Sharon to look the part of a star, in an attempt to dazzle the music industry powers-that-be.

Acting alongside other family members, Rosario and Sharon attack the task of finding a space between fact and fiction with ease; that the former is credited with assisting on the script, and that both played a part in fleshing out their roles, is apparent in their incisive portrayals. The decision to shoot in sequence clearly helped, aiding the duo in turning an assumedly happier real-life relationship into a battle between a father’s aspirations and a daughter’s quest to shape her own identity, as largely expressed through non-verbal means.

Against an emotive soundtrack, Luzi and Bellino’s continued visual commitment to documenting the world around them also proves a highlight, pairing the feature’s naturalistic approach with images to match. When they’re not exercising their penchant for hewing close to their actors’ faces, they’re entrenching Crater in the streets and sights of Naples’ outskirts, almost claustrophobically and oppressively so. As the film’s title intimates, their surroundings form a bunker — one, thematically, that can leave its residents feeling hollow as its boundaries make themselves plain.