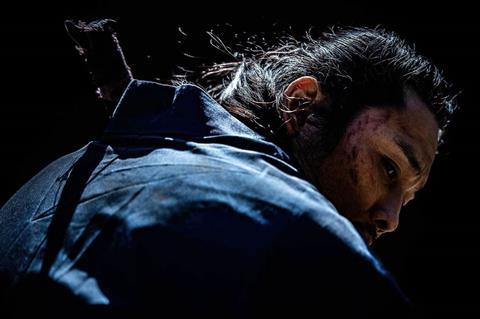 Crazy Samurai Musashi is set fair to be the 1917 of action flicks. The latest, long-in-development collaboration between director Yuji Shimomura and star Tak Sakaguchi (Death Trance, Re: Born) offers the unique selling point of showcasing an uncut 77 minute action sequence in which the famed samurai swordsman is confronted by a relentless army of opponents. That should be ample enticement for genre fans and could even attract a wider constituency of the curious in the tradition of Gareth Evans’ The Raid (2011).

There are glimmers of humour in the non-stop action as the body count mounts into the hundreds.

Not exactly top heavy with narrative, Crazy Samurai Musashi has a prologue swiftly establishing that the Yoshioka clan’s honour is at stake. Two leaders have been killed, vengeance is required and hundreds of mercenaries and students have gathered in the woods with the sole objective of slaying Musashi (Tak Sakaguchi). This provides a great build up to the character’s first appearance. He is described in hushed tones as a “monster”. The mere mention of his name turns one man’s bowels to liquid. “Even the notorious Musashi will not survive this army of men” is the confident but misplaced prediction.

The main event is the uncut storm of flashing blades, cracking bones and collateral damage in which relentless killing machine Musashi takes on all comers. Action speaks louder than words in a screenplay credited to Atsuki Tomori that also acknowledges an original draft by Sion Sono. There is a clever variation of location, lighting and pacing as Musashi keeps swinging from sun-dappled forest to farm buildings and an abandoreviewsned village.

The fights in which Musashi confronts multiple assailants rely on his fondness for splitting skulls and smashing bones. Opponents swarm into view, circling and swirling like vultures ready to pounce. All of them meet a bloody end although not before managing to stagger, stumble or crawl just out of shot. You constantly sense just how carefully events are being staged and the very orderly fashion in which mercenaries line up for their chance to cross blades with Musashi. Presumably honour dictates that nobody would dare to stab him in the back. Awareness of the mechanics does little to diminish the thrill of their execution.

Rare, one on one encounters help to counter the growing risk of repetitiveness and viewer fatigue and there are smartly contrived moments that provide Musashi with pit stops for water, rest, fleeting introspection and essential blade maintenance.

The camera stays on Tak Sakaguchi throughout, lingering at his back, pulling away to reveal the impossible odds his character faces or rushing in to capture a close-up of the sweat-stained features and panting of someone being tested to the limit.

There are glimmers of humour in the non-stop action as the body count mounts into the hundreds and a weary Musashi demands: “How many men do they have? I thought it would be around 70.” A prologue also reveals that it was never about honour or valour for him: “I just want to win”.

Hidehiro Kawaii’s score works to fire up the action and keep the pulse rate high in what becomes an action marathon. In the end, Crazy Samurai Musashi emerges as an impressive feat of fight choreography and of physical stamina on both sides of the camera, not least from its indefatigable star Tak Sakaguchi.