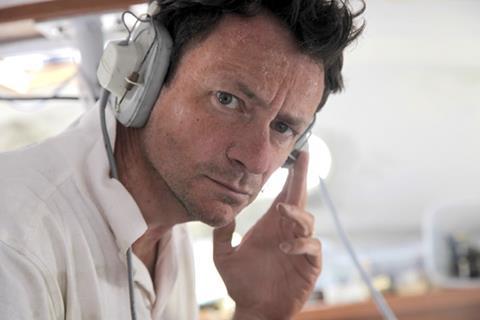 In 1969, while competing in a Sunday Times competition to be the first yachtsman to circumnavigate the globe single-handed without a landfall, ‘weekend sailor’ Donald Crowhurst disappeared. From logbooks left behind on his catamaran the Teignmouth Electron, it became apparent that he had been transmitting false positions while dawdling off the coast of Argentina, and suffered a psychotic breakdown brought on as much by isolation as the stress of attempting a massive confidence trick.

The news item, which capped a 1960s craze for yachting feats, has proved attractive material for many writers and filmmakers – it even partially inspired the Mars landing hoax element of Capricorn One. Simon Rumley’s stripped-down, intensely focused Crowhurst arrives almost simultaneously with James Marsh’s The Mercy, a bigger-budgeted, starrily cast version of the same story. Throughout Crowhurst, the protagonist frets about his underdog status even as more qualified, better-resourced sailors fall out of the race, and there’s a sense this little movie gets some of its bite from the fear that it’s about to be overtaken or capsized by the wash of a more lavishly-funded vessel.

Rumley opens with the moment that paradoxically precipitates the protagonist’s descent into madness. Crowhurst (Justin Salinger) learns over the radio that all the other contestants have fallen out of the race – the clear leader has opted not to pick up the prize and disqualified himself by staying at sea – and that he has won. The problem is that he resorted to deception on the assumption he would be able to sail home a gallant loser – and not forfeit his home, under the terms of a bad deal with a shrewd sponsor. He presumed he wouldn’t need to offer his bodged log books for scrutiny because ‘nobody ever cheats to come last’.

Then, in a brisk establishing flashback, Crowhurst’s situation is sketched. An inventor whose innovation (ironically, a navigation system) hasn’t yet turned a profit, he’s struggling to stay above financial water and is acutely conscious of a need to be worthy of his devoted wife Clare (Amy Loughton) and four well-spoken children. He hits on the race as a way of publicising his gadget, and gets backing from the coast town of Teignmouth for his hard-to-capsize (but not entirely seaworthy) catamaran, though this means starting his voyage a hundred and fifty miles the wrong way. Throughout, there’s a focus on the supposedly life-altering prize of £5000, which – even adjusted for inflation – now seems ridiculously low for a venture that defeats sailors far more experienced and prepared than Crowhurst.

Rumley is known for uncomfortable psycho-horror dramas (Fashionista, Red, White & Blue, The Living and the Dead) and Crowhurst really starts to grip when dry land and reason have been left behind. Salinger is an intensely credible, unnerving Crowhurst (Colin Firth has the role in The Mercy) – a specimen of middle-class English desperation with a touch of the young Ian Holm in his muttering introspection.

With mostly jolly caricatures seen in cutaways to his contacts in ‘Blighty’, and ominous, full-throated renditions of patriotic songs to stress the Britishness of this tragedy, there’s a sense that Crowhurst’s story is also emblematic of a kind of self-deluded nationalism that’s among Rumley’s habitual subjects. The grimmest moment, which pulls back on speculating how exactly Crowhurst separated from his boat, is accompanied by a protracted, unnerving rendition of more verses of ‘God Save the Queen’ than the average Briton either knows or would be comfortable hearing.

Nicolas Roeg, aboard as executive producer, once toyed with Crowhurst as a subject (his most comparable films are Walkabout and Castaway). The most memorable, affecting stretches here are the most hallucinatory and Roegian, as Rumley deploys all the visual and aural effects at his disposal to convey the fragmentary state of Crowhurst’s mind – even the ridiculous visions are terrifying. It counterintuitively plays up the claustrophobia of the catamaran rather than the vast empty seas around to cumulatively oppressive effect.

Like most Rumley films, it’s perhaps too intense and spare for mainstream audiences – and it remains to be seen whether Crowhurst will benefit from the attention paid to Marsh’s film, which is due from the same UK distributor (StudioCanal), or be eclipsed by it. However, it reaffirms Rumley’s position among the most interesting, unconventional British filmmakers of the moment.