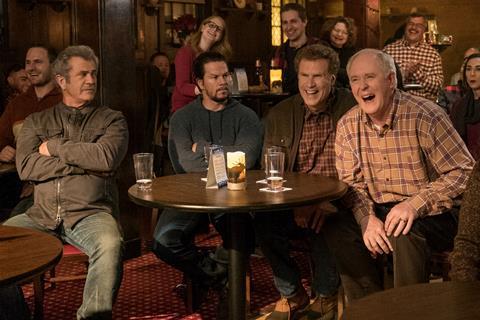 Daddy’s Home (2015) was a broad, basic comedy powered by a keen insight into a tension embroiling modern masculinity. In our more progressive age, sensitive, emotionally evolved men can feel intimidated and emasculated by their more rugged, assertive cohorts — especially when the cohort in question is your wife’s virile ex-husband.

Daddy’s Home 2 attempts pseudo-edgy moments but, rather than being shocking, these scenes just come across as tasteless.

Unfortunately, that zeitgeist-y notion is largely squandered, along with any sense of character, wit or inspiration, in this deeply lazy sequel. Will Ferrell and Mark Wahlberg are a lot less fun this time around, paired with a fumbling John Lithgow and a stiff Mel Gibson as their overbearing fathers who stop by for the holidays.

Hitting US theatres on November 10 before arriving in the UK November 22, Daddy’s Home 2 hopes to match the first film’s unexpected commercial success ($243 million worldwide). This yuletide-themed sequel will similarly court family audiences — the original movie opened Christmastime of 2015 — but the betting is that toxic reviews may result in underwhelming returns.

Calling a truce after the events of the first film, pushover dad Brad (Ferrell) and his wife’s ex, macho Dusty (Wahlberg), have learned to share parenting responsibilities, blending their two families into one. But with Christmas just around the corner, the pair must contend with the arrival of their own fathers: Brad’s syrupy sweet dad Don (Lithgow) and Dusty’s crass, womanizing patriarch Kurt (Gibson).

Startlingly similar to the recent A Bad Moms Christmas, Daddy’s Home 2 tries to wring laughs from the anxiety that’s inevitable when different generations of the same family live under one roof for the holidays. (Another shared plot point is that the main characters’ parent is just like them, only in a much more pronounced way.)

Director and co-writer Sean Anders (who also directed and co-wrote the 2015 film) largely recycles Daddy’s Home’s central contentious dynamic: Brad is a pasty wimp, Dusty is a hunky alpha male, and they’re competing for the affection of Dusty’s children. Anders hopes to heighten the comedic stakes by introducing Don and Kurt, but Lithgow and Gibson play these cartoonish dads with such listlessness that instead they gum up the proceedings, slowing the momentum of a movie that’s already lacking quality gags.

The casting of Gibson as a callous, antagonistic heel is no doubt meant to be provocative, the filmmakers playing off the audience’s knowledge of the actor’s troubled past involving alcoholism, assault allegations, arrests, and racist and anti-Semitic comments. The Oscar-winner flashes his trademark crazy eyes and tries to lean into Kurt’s troublemaker personality, but there’s no buoyancy to the performance. Consequently, his every onscreen antic feels sour and forced, and the character quickly becomes repellent.

Daddy’s Home 2 attempts other pseudo-edgy moments, particularly during a sequence with a young girl and a loaded rifle, but rather than being shocking, these scenes just come across as tasteless. Predictably, everything that was memorable from the first film has been amplified here to the point of gratuitousness. As in Daddy’s Home, Brad suffers slapstick humiliation when he tries to operate complicated machinery, and the 2015 film’s running jokes are duly brought back for this follow-up, each of them straining to recapture what was clever or novel the first time around.

Inevitably, Brad and Dusty return to their old squabbling ways — playing into Kurt’s vindictive plan to wreck his son’s happiness — and Ferrell and Wahlberg rehash their prickly back-and-forth from the original film, but without the same comedic gusto. Starting with 2010’s The Other Guys, these actors have demonstrated a yin-and-yang chemistry that was expert in its understatement. Daddy’s Home 2 has no patience for such relative nuance, however, and so its stars are forced to enliven dull comedic scenarios with pained exasperation. Viewers may share the sentiment.