‘Death On The Streets’: Thessaloniki Review 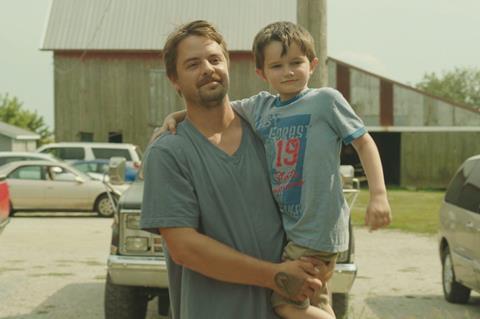 ‘Death On The Streets’

The bald title emphasises the earnest intentions of Death On The Streets, Johan Carlsen’s “existential road movie” which attempts to put a human face to the tragic casualties of a bankrupt American Dream. The plight of a proud young worker struggling to provide for his family and retain his self-respect touches on some interesting issues but makes for a glum, low-key drama.

Carlsen sets his story deep in the heart of America, shooting in rural Illinois. The vast expanses of swaying cornfields, the gentle breeze whispering through the trees and the chatter of birdsong on the soundtrack all seem designed to evoke the cinema of Terrence Malick. This is a world of tractors and silos, family barbecues, honky tonk bars and God-fearing patriots.

Kurt (Zack Mulligan) is a hardworking farm hand with a loving wife (Katie Folger) and two sons. Unemployment causes financial hardship and makes Kurt increasingly withdrawn. Carlsen establishes Kurt as a lost soul, depicting him depressed and alone staring into space or even more isolated in the bustle of a Thanksgiving family gathering that he would rather avoid.

Kurt’s inability to articulate his emotions or share his woes opens up the possibility of addressing stoical masculinity and the price that extracts. There is a lingering sense that he should just man up, find a way to provide for his family and weather any rough patches. These intriguing tensions are never satisfactorily explored. The notion that Kurt might also be experiencing a crisis of faith is something that Carlsen toys with but that never comes into clear focus.

Kurt’s troubles are only exacerbated by a worried wife and a well-meaning family circle who think that a few discreet hand-outs and some faith in God will sort him out. Constant enquiries as to his wellbeing grow repetitive and Carlsen’s use of non-professional actors lends a stilted air to some of the conversations and encounters.

Death On The Streets hits its stride in the final third with Kurt taking drastic action to escape the pressures of home. Everything until this point acts as an extended back story. Subsequent developments are handled with assurance and are much more compelling as we follow Kurt’s life as a drifter, casual labourer and rough sleeper.

Lead actor Zack Mulligan is better known as one of the skateboarding friends in the Oscar-nominated documentary Minding The Gap (2018). His diffident air works well for the bruised, defeated aspects of Kurt’s character but he lacks some of the fire and shading that a more experienced actor might have brought to the part.

Carlsen peppers the film with whimsical asides (Kurt’s friend practising with nunchunks) and moments that seem blunt in their irony, including a patriotic Thanksgiving rendition of the National Anthem. There is no doubting the sincerity of his intentions in exploring the failure of the American Dream but a lighter touch is needed to really do them justice.