El Paso, Texas, where a cold hard winter for the dispossed is captured by Carlos Alfonso Corral 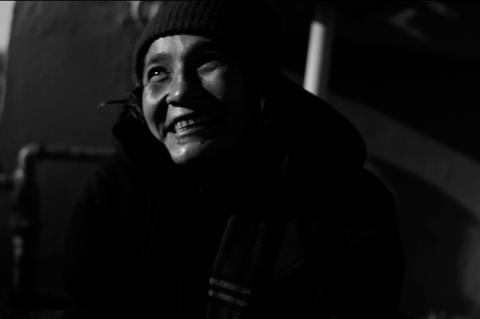 The members of the homeless community of El Paso, Texas are already on the periphery of society. But further out still are the subjects of this haunting black and white documentary: individuals who, for whatever reason, are barred from the OC, (the Opportunity Center for the Homeless in El Paso), a hub which offers shelter and protection for those without a safety net. A husband and his pregnant wife dream of a better life for their unborn child but face a daily struggle with drug addiction; a grieving father wears a memorial for his son tattooed on his hands. A teenaged girl has found peace and a family on the streets, but bears the scars and bruises of life on her face. The subject matter is frequently bleak, but there is a sense of mutual respect and of collaboration between the filmmaker and the subjects of this intimate portrait.

Corral really captures the sensory assault of life on the street

The feature debut from Mexican-American photographer and filmmaker Carlos Alfonso Corral, Dirty Feathers lists Roberto Minervini as a producer (Corral has worked with Minervini on all his films since Stop The Pounding Heart). And Minervini’s work – in particular his most recent film, What You Gonna Do When The World’s On Fire? - is a key reference point, sharing with Dirty Feathers a kind of empathetic lyricism. The film also evokes some of the free-flowing intimacy of Khalik Allah’s early work. Following a festival run, the film will likely be of interest to specialist documentary distribution outfits and events.

Brandon and his wife Reagan have made a bed for themselves on the pavement, their possessions arranged in a kind of wall to shield them from prying eyes. Reagan sighs – something between relief and resignation – as she takes the glass pipe her husband passes to her. But whatever it is that she smokes provides only a momentary lift. “I feel the baby move, and it makes me feel like shit,” she murmurs, adding of her addiction, “nothing ever goes to plan because I can’t control it.” But they make plans nonetheless. In a happier moment, Brandon strokes his wife’s belly and talks of his idea to open a soul food restaurant. They save a pair of donated shoes for Ashley, a teenaged girl with a dog and a prophet’s fervour. Gathered around a fire in which they ceremonially burn her old pair of sneakers, there’s a moment of communal optimism and joy.

There’s a purity and spirituality to Ashley, who talks of faith and a de facto family in a voice which at times sounds as though it could have been lifted from Linda Manz’s narration in Days Of Heaven. “I like to see my people eat before I do,” she says, in her odd little croak, deploying grace and wisdom beyond her years. In a different time and a different world, she might have been consulted as an oracle or persecuted as a witch.

Elsewhere, two men in an uneasy friendship compare mental health issues as if they were Top Trumps cards; a raging sixty-year-old with pin eyes and smashed teeth spits his displeasure at America in general and Trump in particular. And a former serviceman talks of the six years he spent in the Navy from his home under an overpass.

The black and white photography is stark and sobering; but it is in the score and the sound design that Corral really captures the sensory assault of life on the street. A scene in a communal room in the homeless shelter layers hectic jazz with a melody from home, sung from the heart of one of the Mexican immigrants who have washed up in this corner of Texas. One of Chopin’s ’Nocturnes’ accompanies a moment of transcendence and commune between lost souls flung together. And in his own little world, with drug deals and urgency surrounding him, an old man blows his harmonica and sings for the camera.