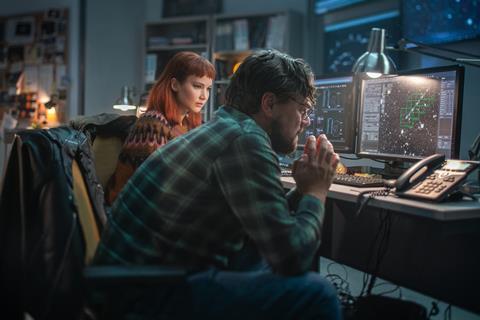 What if scientists knew the world was ending and humanity did nothing to prevent it? Don’t Look Up turns that frightening premise into a toothless satire, following a collection of characters who are faced with the imminent impact of a comet that will destroy all life on Earth — but rather than the typical disaster film in which the best and brightest work together to avert calamity, Adam McKay’s dark comedy suggests that we’ll continue to be our self-absorbed, uninformed selves. Clearly a commentary on global warming, which folds neatly into a treatise on our ongoing Covid-19 crisis, Don’t Look Up takes aim at plenty of ills — especially the scourge of science-deniers. But a smug, self-satisfied approach proves insufficient at addressing the legitimate woes at core of  this picture.

Best of all is Timothee Chalamet, who plays a stoned skateboarder, his every utterance delightfully off-kilter.

Opening on December 10 in the US before arriving on Netflix two weeks later, the film’s starry cast includes Leonardo DiCaprio, Jennifer Lawrence, Timothee Chalamet, Cate Blanchett and Meryl Streep. Those onboard for McKay’s The Big Short and Vice will be intrigued by this angry assault on the dumbing-down of the population by the media and a myopic ruling class. And liberal audiences may enjoy a comedy that flatters their worldview while condemning conservative politicians and anti-intellectualism. But too often, Don’t Look Up congratulates itself — and the audience — for feeling superior to the film’s villains

DiCaprio plays Randall, an astronomer who, along with grad student Kate (Lawrence), discovers a comet heading directly towards our planet that will trigger a global extinction event — and we only have six months to avoid catastrophe. But on meeting US President Orlean (Streep), they’re shocked when she dismisses them as being hysterical, which prompts them to go to the press. There, too, Randall and Kate are only met with skepticism and suspicion, partly because these scientists are socially awkward and, therefore, don’t come across well on television.

McKay’s screenplay is powered by a grimly funny idea: if it seems ridiculous that no one believes Randall and Kate, well, why do so many dispute the existence of the coronavirus or climate change? As a parable, Don’t Look Up could be chilling and hilarious, but what dooms the film is McKay’s tendency to go after easy targets rather than really exploring the implications of his premise.

The problem starts with his conception of Randall, a nerdy family man who naively believes that simply by warning people, those in charge will spring into action. But DiCaprio, an actor who has long made environmentalism one of his core causes, feels too fussy in the role, failing to tap into the scientist’s timid demeanour or growing frustration that no one will listen to him. Happily married to his mild-mannered wife June (Melanie Lynskey), he attracts the notice of Brie (Blanchett), a stereotypically vapid TV host, resulting in a torrid affair that boosts his self-esteem — and eventually causes him to compromise his principles in order to become a famous talking-head. It’s a predictably ironic character arc, and DiCaprio can’t bring much comic spark to the character — tellingly, he’s most compelling when Randall finally has his Howard Beale-like meltdown on live TV.

While there is certainly no shortage of problems facing society, Don’t Look Up takes lazy shots at social media, pop stars, cable news and the rich. The performances veer toward the cartoonish, with most of the people Randall and Kate encounter being dimwitted in unfunny ways. Mark Rylance plays a caricature of a messiah-like tech visionary, while Ron Perlman does a dull parody of gung-ho military generals. The satire would work better if McKay made the media and government forces more complex so that audiences can understand just how frightening their complicity is in turning the world into an uglier place. But since the cast mostly portray their characters as one-dimensional vain fools, especially Streep and Blanchett, the jokes fall flat.

To be fair, there are some grounded performances, with Lawrence bringing righteous indignation to Kate. And as the one rational White House scientist, Rob Morgan is refreshingly lowkey, eliciting laughs through his dry delivery. Perhaps best of all is Chalamet, who plays a stoned skateboarder smitten with Kate, his every utterance delightfully off-kilter.

Decades ago, Network declared that media and corporations were killing democracy, anaesthetising us with distractions and mindless entertainment. McKay’s film makes a similar argument, proclaiming that we’re so consumed with Facebook and slanted political discourse that we don’t even heed the warnings of our impending doom. One can sympathise with that position while still believing that humanity deserves better than Don’t Look Up’s glib rebuke.