Inspired by ’Force Majeure’, this ski resort comedy fails to pack a punch 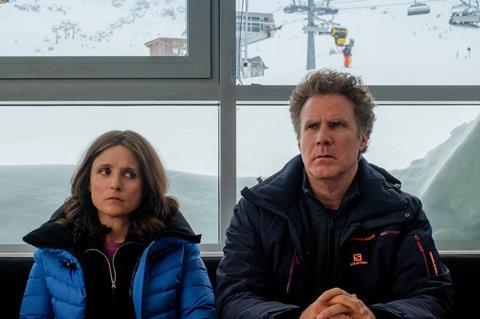 In the twisty, tricky, mogul-filled black run that is US remakes of foreign-language films, Downhill just about crawls its way to the bottom of the slope; the latter part on its knees. Tempting fate with the very title, this comedy-drama “inspired” by Ruben Ostlund’s terrific (and quite widely-seen) Force Majeure widens the ski slope to its broadest access level. It’s a commercially marketable prospect, sure, thanks to a committed performance from Julia-Louis Dreyfus (who also produces), but Downhill has also groomed out the subtlety from the original Swedish-language source material in some wincing stabs at cross-cultural comedy.

Take, for example, the very inciting incident at the film’s heart. A family is enjoying an al fresco lunch at a ski chalet when an avalanche dramatically descends. In Force Majeure, you’re never quite sure what happens next, setting a queasy tone for the domestic quagmire that follows – did the husband really just grab his mobile phone and run, leaving his wife and children behind? In Downhill, there’s no doubt. The screen still goes to white, though, as Downhill copies more visually from Force Majeure than “inspired by” would suggest.

The hardest part of the film for international audiences to ski through will be the dated and blithely lazy cultural stereotyping at every bend – did the sexy Italian ski instructor or the sex-crazed Austrian receptionist, bizarrely played by Miranda Otto, just helicopter in from National Lampoon? Writer/directors Nat Faxon and Jim Rash are experienced hands, but this Americans-adrift-in-a-strange-land scenario is unlikely to cross over to sophisticated audiences when Searchlight opens Downhill in the US and UK in February. Louis-Dreyfus and co-star Will Ferrell will be the main draw, with the reach very US-focused.

Billie (Dreyfus) and Pete (Ferrell) are the (late) middle-aged, middle-class aspirational couple on holiday in the Austrian Alps with their two young children, posing for pictures as the film commences. They’ve more or less settled into an easy routine together, but the recent death of Pete’s father has set his mid-life-crisis in motion. He has booked, for example, an adult ski lodge, avoiding the family-friendly resort 20 minutes away which the children might have enjoyed more. Certainly there’s not much in the way of chemistry between the film’s two leads, making it very believable when he races for the door mid-avalanche (which is actually a controlled explosion) on their first proper day of holiday.

Another couple eventually arrives in the resort – played by Zach Woods and Zoe Chao – to witness the marital inferno that ensues, with Billie and Pete either alternatively jealous of, or sniping at, them. While the film entirely loses the question of whose version of the truth to believe, it does fill the hole with some TV-like situational comedy provided either by guest relations manager Charlotte (Otto) or the sexy calf-rubbing ski instructor Gugielmo (Giuliu Berruti), while the tiresome Pete ventures on a drunken night out to a local club. There’s a meaningless clip of a dubbed David Hasselhof in Knight Rider on TV, a joke that expired two decades ago.

While acknowledging Force Majeure’s stunning visuals, Downhill opts not to make its central ski lodge the slightly menacing, mysterious character that it was in the original film. Shooting on location in Fiss, Austria (as opposed to the French Alps), the film also benefits from some spectacular vistas, while Volker Bertelmann (also known as Hauscha) provides a cuckoo-chime score that is one of the film’s most distinguishing elements.