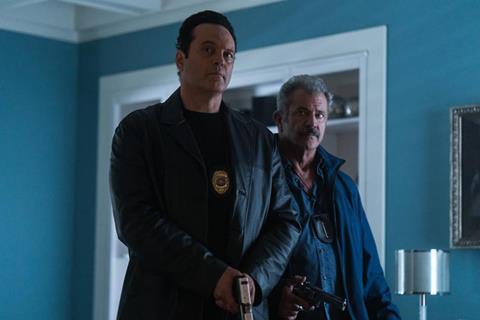 At the climax of S. Craig Zahler’s new thriller, a character at the wrong end of a machine gun burst wryly comments: “That’s excessive.” Of course, anyone’s who’s seen Zahler’s earlier films would get the irony; for this director, a little gunfire is small potatoes, and “excessive” doesn’t quite cover what he’s been known to inflict on his characters and his audience.

Dragged Across Concrete sees the writer/director return to Venice a year after Brawl in Cell Block 99 also played out of competition. That film, and the equally well-received cannibal western Bone Tomahawk established Zahler as a skilled purveyor of character-driven yet gruesomely violent genre movies, with a twist. With his third, he appears to be attempting the same approach in a slightly more accessible format, with mixed success.

Judged on its own merits, this is a perfectly serviceable cop-turned-bad crime movie, featuring an enjoyable pairing of Mel Gibson and Vince Vaughn as two detectives deciding to cash in on their skill set, and a potentially break-out turn by Tory Kittles as a small-time crook who finds himself in too deep. But anyone expecting a progression in Zahler’s work may be disappointed, as the amusingly mannered dialogue starts to feel self-conscious and forced, as does the fatalism.

When Brett Ridgeman (Gibson) and Anthony Lursasetti (Vaughn) arrest a latino drug dealer, they prevent an enormous quantity of drugs from hitting the streets. But Ridgeman’s rough handling of the dealer has been filmed by a passer-by, and they are swiftly suspended. For Ridgeman this is a final straw. Approaching 60 and with a disciplinary record that has prevented promotion, he’s broke, and his family is stuck in a tough area where his teenage daughter is repeatedly attacked. They need to move out, fast. He decides he has the “skills and the right to acquire proper compensation” and enlists an uncertain Lursasetti to join him in staking out a known villain until such time as they can rob him.

Zahler adds to the mix Henry Johns (Kittles), newly out of jail and also with a family he also urgently needs to support. Johns and a friend join a gang which is about to rob a bank, led by exactly the man the disgraced policemen are watching. Neither the cops nor Henry are aware of just how efficient and pitiless these criminals are.

Dramatically, the film is at its best during the stake-out scenes, with Gibson and Vaughn riffing nicely off each other, contrasting Ridgeman’s gruff experience, verging on bitterness, with Lursasetti’s jovial, slightly oblivious good nature. Gibson is in particularly good form, with a low-key performance that conveys disappointment and desperation, yet also innate professionalism – Ridgeman’s obsession with the percentages of every action being one of the better running jokes. And the ice blues still work their magic.

Eventually, the key stand-off will be between Gibson and Kittles, the latter playing an ex-con who really shouldn’t have been in the criminal justice system in the first place, whose smarts will get the better of all around him. It’s a calm, measured, charismatic performance.

But Vaughn and Kittles deliver an excess of stylised mumbo jumbo – whether it’s Henry’s assertion that “Pops is a yesterday who ain’t worth words”, or Lurasetti’s use of the word “anchovies” every time something’s a bit off. Equally, the moments of trademark viciousness feel tagged on, including an evisceration, a woman having her hand blown off, and another woman held hostage and horribly humiliated.

If the running time seems a tad excessive, that may be due to a number of superfluous scenes, including the introduction of a character, a bank employee played by Jennifer Carpenter (who starred with Vaughn in Brawl) and sequences involving the bank robber’s preparations, Zahler may feel, however, that he’s creating the whole canvass of a criminal world here. The procedural fascination of the stake-out aside, the film’s action lacks the baroque weirdness of Bone Tomahawk or the sheer intensity of Brawl, with the final confrontation between cops and robbers proving anti-climactic. As Vaugh would say: “anchovies.”