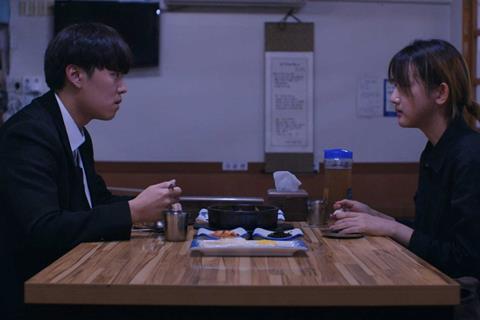 When viewing Park Hee-kwon’s debut feature Dust and Ashes, it’s impossible not to think of Parasite, by his compatriot Bong Joon-ho. The films are very different animals, yet bonded by offering dramatic perspectives on the lengths to which an impoverished underclass might go to make ends meet. With a far inferior budget and a principal cast of one, Park offers a sharply-focussed, emotionally laser-like drama. Restrained and enigmatic – it’s remarkable how tense it becomes as so very little happens – this introduces another South Korean filmmaker with serious intent. Other festivals should take note after its Tallinn debut.

Dust And Ashes effectively plays as a mystery that segues into a slow-burn crime procedural of the “will they get away with it?” variety. The excellent Ahn So-yo carries the film on her slender shoulders as Hae-su. We first see her emerging from a shift at a factory of undisclosed nature, though clearly dirty (possibly toxic) enough to require Hae-su and her colleagues to immediately wash their clothes. Leaving into daylight, she takes a subway to another job, in a restaurant kitchen. When she leaves that, it’s night. Though she must be exhausted, she pauses at the door of her home, frightened to go inside.

Park follows his heroine over the course of the next three days, as she purposefully goes about an illegal plan the nature of which slowly becomes apparent. First she visits a man, who is to provide some dodgy documents; then she is picked up by another, smilingly nonchalant, man in his car, who drives her home and, once inside, starts preparing his camera. Then we discover why Hae-su has been so wary of her house.

It’s a plot that doesn’t deserve much more elaboration. Suffice to say there has been a tragedy, but one which has been orchestrated for the family’s benefit. The shady operators Hae-su is dealing with will ensure she collects on a life insurance. But the key to the film’s emotional punch is that she is not a criminal or exploiter, but a young woman who must deal with grief and the practicalities of funeral arrangements, while also carrying out a deceit.

Every element of the film is pared down, particularly the dialogue – Hae-su spends long periods saying nothing at all – and cinematography; the camera is fixed on her and the people she deals with, including her brother (an unwilling accomplice in the plan), with only occasional wider shots of the city at large, represented by rainy, often empty or derelict streets. There is no music, the most telling sounds being of the factory, off screen at the start of the film, a potent indicator of Hae-su’s dreary life.

Ahn So-yo’s performance is likewise minimal but highly effective, suggesting a pinched-faced young woman who is frail but determined, withholding most of her emotion while trying to get a job done. The actress is a perfect reflection of the director’s direct, no-nonsense, unsentimental modus operandi.

The dust refers to the factory that opens the film, ash to the detailed cremation that concludes it. The stakes are played out in between, including one desperately shocking scene and a thrilling interview with one of those insurance investigators you just know are going to be waiting on the corner to see where you go next. The lean power of the film is summed up by one simple action by an office worker dealing with death records: picking up a pair of scissors, she cuts an identity card in half, says “all done” and moves onto the next.