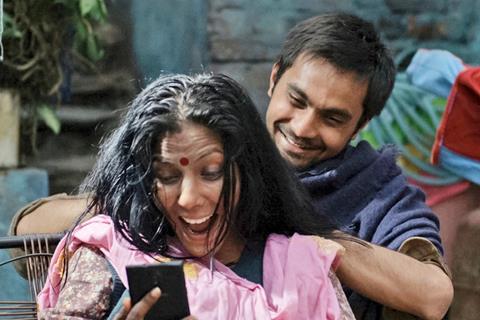 A satire of dispiriting and dehumanising modern-day working conditions, this scathing and amusing feature debut from Prateek Vats (2017 documentary A Very Old Man With Enormous Wings) adopts its narrative from an inspired real-life source: literal monkey business. New Delhi newcomer Anjani (Shardul Bhardwaj) is a just-hired professional monkey repeller tasked with keeping government buildings and public spaces free of the scampering primates, while also ensuring that no harm comes to the revered animals; a situation ripe with parody and farce.

Premiering in Pingyao last year before screening at the Mumbai Film Festival and most recently in Berlin’s Panorama section, Eeb Allay Ooo! does not wring any particularly unique insights out of its distinctive scenario; that humans are often treated worse than animals is not a new observation. But aided by lively on-the-ground cinematography that wanders the capital with an insider’s eye, this is a smart, likeable underdog comedy that should continue to engage audiences and attract further festival attention.

Living with his pregnant sister (Nutan Sinha) and her policeman husband (Shashi Bhushan), Anjani does not want to spend his days scaring away sacred rhesus monkeys. He has zero aptitude for the work, he cannot master the three sounds that his colleagues use — the film’s titular “eeb”, “allay” and “ooo”, which mimic langur monkeys, the rhesus’ natural enemy — and, unlike veteran wrangler Mahinder (real-life monkey repeller Mahinder Nath), he is more scared of the animals than they are of him. But as the screenplay by first-timer Shubham makes no qualms about stressing, Anjani has little choice. He has no other employable skills, and therefore no other options.

Vats was inspired to make Eeb Allay Ooo! after first reading about Nath, then discovering the absurdity of the monkey-repelling industry (the job only exists because using langurs to shoo away rhesus monkeys sparked animal rights protests). Accordingly, as Anjani tries everything he can to succeed — including dressing head-to-toe as a langur, a decision that makes him stand out even on the constantly crowded streets — the film leans firmly towards the silly and ridiculous. Yet it never forgets that its underlying details spring from reality.

In his second on-screen role (after 2018’s Bhonsle), the quietly expressive Bhardwaj convincingly navigates Eeb Allay Ooo!’s tricky tonal balance. He plays the downtrodden everyman with ease; even as Anjani becomes immersed in increasingly outlandish situations, through his unaffected performance Bhardwaj epitomises every eager but unskilled worker trying to carve out a better life. Nath’s unsurprisingly authentic portrayal also makes an imprint, as does the movie’s sprawling supporting cast of rhesus monkeys.

A fascinating on-the-street documentary could be made about the latter, which Vats flirts with via his naturalistic style, and cinematographer Saumyananda Sahi (Just Like That) rarely takes the camera away from the animals’ faces for too long. Also effective is Eeb Allay Ooo!’s atmospheric sound design, which layers New Delhi’s hustle and bustle with the monkeys’ — and the wranglers’ — forceful, piercing screeching.