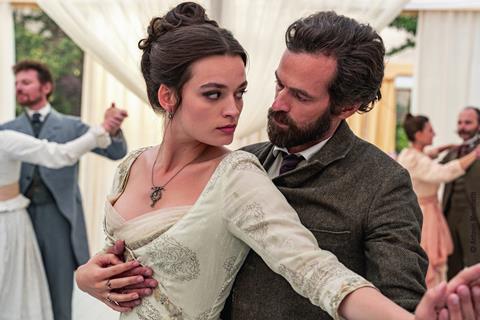 The Eiffel Tower rose in two years without power tools or computers or construction cranes. Martin Bourboulon’s ambitious, handsomely appointed and unapologetically old-fashioned Eiffel took 25 years to make it to the screen and that’s almost certainly a good thing since digital effects can now convincingly render the various stages of the so-called “staircase to infinity” with startling realism. Forced to re-schedule its French release several times due to the pandemic, this enjoyable slice of popular entertainment — starring Romain Duris and Emma Mackey and with a title which will ring bells with prospective film-goers — should attract audiences worldwide following its October 13 domestic debut.

Issues of class, wealth and power are woven into the tale but this is a bittersweet love story at heart

It’s enjoyable for us, as viewers, to know that the 300 metre tower (as it was then known) will indeed get built when Gustave Eiffel himself, skeptical creditors and his mostly loyal but sometimes unpaid workers have no such certainty. The late 1880s were a time of incredible invention and upheaval and Eiffel was intent on pursuing challenges he could call “modern”. Eiffel’s real-life track record of impressive exploits and setbacks is far too rich to cover in any one film. So Eiffel narrows its focus by pairing name-recognition with informed speculation about “why” he went from showing scant interest in contributing a structure to the 1889 World’s Fair (he was keen on designing a mass transit system, the Metropolitan) to being hell-bent on devising and constructing the tallest man-made thing to date.

As the film opens, Eiffel (Duris) has quite recently devised the armature for France’s gift to the USA — the Statue of Liberty. That the same visionary engineer was synonymous with two hard-to-miss pieces of visual shorthand for entire nations is cause enough to have his own film. The charge may be leveled that  this peppy, well-acted venture is a French film trying too hard to be a Hollywood-style affair. Yet with technical gusto on tap, the French film industry needn’t apologise for delving into the life of a real French figure (Abel Gance’s Napoleon, anyone?).

Eiffel, who came from a modest background, was a widower with children who not only had to conceive the tower, he had to inspire the workers who built it. His motivation, the film posits, was to impress a recently re-discovered long lost love. Twenty-five years after incidents that are doled out with the right mix of flashbacks and emotional secrecy, he crosses paths with one Adrienne Bourgès (Emma Mackey), now the wife of an influential newspaper columnist (Pierre Deladonchamps), whose support the marketing-conscious Eiffel needs in order to erect an unavoidably prominent iron structure upon the relatively sedate Paris landscape.

Romain Duris looks fetching in period garb (he played the title gentleman thief in 2004’s big screen Arsène Lupin) as does Mackey (Sex Education on Netflix), who is both convincing and fun to watch as a seemingly spoiled young beauty schooled in frivolity and seduction who turns out to have a deeper personality than appearances would suggest.

The scenes in which the feet of the tower seem destined to sink into bog and muck and the hold-your-breath suspense surrounding the ingenious sand-based system intended to properly align the entire structure are keenly depicted and thoroughly entertaining. (The Vatican is opposed to the tower whose height they believe to be humiliating for Notre Dame cathedral.) Issues of class, wealth and power are woven into the tale but this is a bittersweet love story at heart.