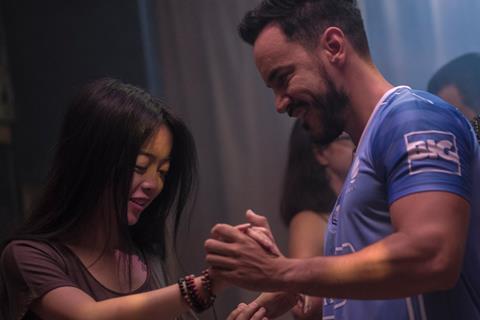 Deep in the creaking hold of a container ship, Chinese migrants Lei (Jing Fu) and Wong (Lidan Zhu) form a bond. It is something that will stand both in good stead as they attempt to negotiate the uncertainties of life as illegal immigrants in the port city of Guayaquil, Ecuador. Lei is determined to continue her journey to New York; Wong prefers to make a life for himself in Latin America with the ultimate aim of bringing his son to live with him. But both realise that their plans are very much dependent on the whims and vagaries of other people. While there is currently no shortage of films tackling the migrant experience, Emptiness adopts a perspective which is less commonly explored: that of the Chinese migrant to South America. That said, the narrative of exploitation and vulnerability is all too familiar.

The film suggests that migration is processed in stages, a bit like a bereavement.

Paul Venegas’ fiction feature debut strives for authenticity, using non-professional actors cast from the real-life community of Chinese immigrants in Guayaquil. The result is the kind of persuasive but unpolished portrait which should connect with festival audiences but might struggle to assert itself beyond the circuit.

The most accomplished performance comes from Fu, who brings a bit of sass and confidence to the character of Lei, who has no reason, as yet, to doubt that her dream of making a new life in New York will come to fruition. Sharp-witted and kittenish, she charms every man she meets, including the rather slippery Chang Da (Day Min Meng), the man who will arrange her onward journey. If it suits him to do so.

Chang offers to help her open a beauty parlour right there in Ecuador, but Lei is doubtful. “It’s hard for me to trust men”, she says. And the nervy score, full of slippery strings, sounds a note of alarm which backs up her suspicions. Lei is well aware that her charm is her best bet when it comes to securing her future, so in addition to fielding the clumsy attentions of Chang, she also toys with the aggressively flirtatious but ultimately harmless Victor (Ricardo Velastegui).

Wong, however, is less well-defined as a character, an issue partly to do with the thumbnail-sketch writing, which explores motivation but doesn’t delve deeply into the man. It’s also due to the inexperience of the actor: Zhu is clearly ill at ease with dialogue and doesn’t seem especially comfortable in front of the camera.

The film is divided into chapters with titles like “Desire”, “Nostalgia” and “Desillusion” (sic), suggesting that migration is processed in stages, a bit like a bereavement. But the process is interrupted by the treacherous Chang, who decides to use Lei and Wong as unwitting couriers of something unspecified but definitely illegal. Recognising that they are in danger, the pair call on the help of friends and manage to evade Chang’s plan. But a sobering final scene suggests that for Lei and Wong, like so many other migrants, freedom is relative.