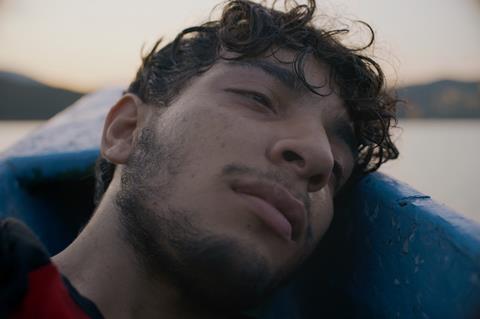 The plight of the modern migrant is viewed as a brutal fight for survival in Europa. Italian-Iraqi director Haider Rashid’s visceral thriller combines tense, genre cinema elements with heartfelt emotions. The slight running time may work against the film but there should be festival interest in this modest but soulful tale.

Makes its point with urgency and compassion

Rashid stages a dynamic prologue that the subsequent film never quite matches. In the black of night, with only the moon to light the way, a group of migrants is herded towards the border between Turkey and Bulgaria. Money exchanges hands, threats are made and then chaos erupts as they walk into the hands of the waiting authorities. Not everyone evades the attack dogs or spray of bullets. Iraqi refugee Kamal (Ali) is one of the survivors, and the film follows him as he takes flight into the woods.

Based on true events from the ’Balkan Route’, Europa provides some context to the individual story in opening titles that inform us of the complicity between criminal gangs and law enforcement. They also tell of the  marauding ’Migrant Hunters’ – nationalist civilian vigilantes prepared to track down and kill rather then allow outsiders entry to their country.

What follows is a lean thriller where danger lurks behind every tree and crag. There are distant echoes of John Boorman’s Deliverance (1972) as Kamal travels through a landscape that is a mixture of the idyllic and the nightmarish. Beautiful waterfalls tumble from mountain heights, but every rock and boulder is a challenge to overcome. He survives on bird’s eggs, berries and river water. Kamal’s breathing becomes the film’s soundtrack, varying in intensity and depth as he runs from trigger-happy killers and passing encounters that quickly become a matter of life and death.

Rashid maintains an oppressive atmosphere. Handheld camerawork puts us in the same state of agitation as Kamal. Close-ups relentlessly focus on the face of actor Adam Ali, capturing every moment of desperation and anguish. It literally feels as if there is nowhere to turn and no hope of escape. There is little dialogue in the film. When a motorist stops to help Ali, the sense of unease is heightened by the fact there is no common language that might allow them to communicate. Mistrust escalates in a wordless exchange that is entirely conveyed in suspicious looks and panicked, wide-eyed stares.

Throughout the film, the viewer only experiences what Kamal experiences and that is both a strength and a weakness. It forces us to see the world from his point of view, never knowing who might be a friend or a foe, but we gain less of the wider story. Those who are pursuing Kamal and other migrants are mostly masked figures running through the woods; distant, anonymous  but deadly. Dedicated to the director’s grandmothers Anna and Nazahad, Europa is an impassioned cry against the treatment of those seeking “safety and dignity” within Europe’s borders. It makes its point with urgency and compassion but still leaves you wanting more.