'Eye In The Sky': Review 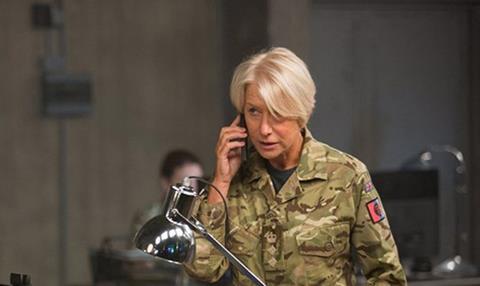 A blunt assault that would have been more efficient as a surgical strike, Eye In The Sky condemns the proliferation of military drone attacks, but this thriller is both manipulative and too proud of its perceived moral complexity. Some fine performances from an ensemble that includes Helen Mirren and Alan Rickman help add dimension to a stacked-deck story of a planned air strike on dangerous extremists. But despite the worthiness of the commentary, director Gavin Hood’s latest inspires aggravation more than righteous indignation.

This is high-minded, heavy-handed filmmaking that buries troubling wartime questions in simplistic rhetoric

Premiering at the Toronto Film Festival, Eye In The Sky boasts star power and a timely message about drone warfare, an issue that has been examined both in documentaries (Dirty Wars) and features (Good Kill). No doubt hoping to provoke discussion about military ethics, the film may prove to be more of an op-ed magnet than a theatrical dynamo.

Written by Guy Hibbert, Eye In The Sky calmly observes as the UK and US militaries work together for a drone operation in Nairobi, where they believe two British citizens and one American have joined a Somali terrorist organization. Using airborne surveillance and agents in the field (including Barkhad Abdi), the team is led by the no-nonsense Col. Powell (Mirren) in a strategy room in London, coordinating with the remote drone pilot Watts (Aaron Paul) in Las Vegas, as well as British Lieutenant General Benson (Rickman), who is watching the operation via video screens alongside, among others, the attorney general (Richard McCabe).

The film ratchets up its tension after it is determined that this terrorist group is plotting an imminent suicide bombing — but the drone strike could result in the death of an innocent girl named Alia (Aisha Takow) unknowingly positioned right outside the targeted house.

Hood (Tsotsi, Ender’s Game) has rich dramatic material to work with: Is halting the potential death of a hundred victims as the result of a suicide bombing sufficient justification for the almost certain death of one girl as collateral damage? And how does being thousands of miles away from the battlefield affect the morals and empathy of those in war?

The problem is that once Eye In The Sky unfurls these ethical dilemmas, there’s nowhere for the film to go. Though partly an absurdist dark comedy — Benson takes a break from life-or-death matters to buy a toy for his own little girl, while another in the chain of command is waylaid by food poisoning — the film is mostly a beat-the-clock thriller in which a decision must be made about whether to order the strike before the terrorists leave their house and the opportunity to stop them is lost.

There’s obviously room to debate how modern warfare should best be conducted, but Hood’s film isn’t nearly as balanced as it pretends to be. For as much as Powell and Benson argue for attacking now to prevent more loss of life down the road, Eye In The Sky clearly favours Alia, who might be the most blatantly symbolic child character since the girl in the red coat in Schindler’s List. And because Hood piles on ludicrous contrivances to artificially raise the stakes, Eye In The Sky morphs into a cut-rate suspense film that shamelessly milks audience concerns about a helpless tot.

Mirren provides grizzled intensity, while Rickman’s air of snide superiority is used to good effect playing a military man who can’t believe he needs to answer to those he views as nitwit civilian bosses. But while Eye In The Sky is effective in building suspense and making a talk-y drama compelling, these techniques are in service to high-minded, heavy-handed filmmaking that buries troubling wartime questions in simplistic rhetoric.