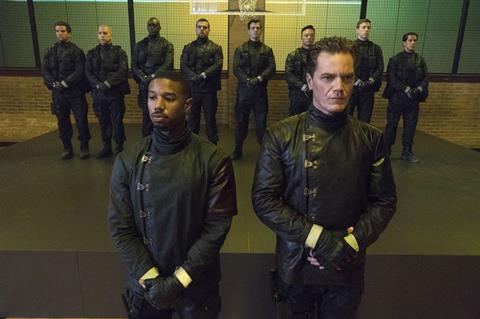 99 Homes director Ramin Bahrani drags Ray Bradbury’s classic book-burning sci-fi parable firmly into the era of fake news, vloggers and emoticons in this liberal adaptation. Francois Truffaut had already played fast and loose with Bradbury’s plot and characters in his 1966 film version, a supposed fiasco which is now back in many critics’ good books. But his tweaks look cautious compared to the full-on facelift operated by Bahrani and co-scripter Amir Naderi, which replaces the regime-led attack on literature with a blanket ban on creative culture of all kinds.

Lushly shot and stirringly scored, Bahrani’s reboot is a decent stab at an update

True, the original book was prescient in many ways, looking forward to a Twitter era when politics would be reduced to “one column, two sentences, a headline”. This HBO production, due for broadcast on 19 May following its Cannes premiere, beds down firmly in a version of the Trump era: a world in which virtual assistants like Siri become surveillance devices and news has been turned into populist, interactive entertainment. Canada, meanwhile, has become the place US dissidents flee to.

It’s an America that looks in many respects like the urban USA of today, pushed perhaps a decade into the future after a shadowy ‘Second Civil War’. It’s ruled over by a regime whose slogans include nuggets like ‘Freedom is Choice’; one indistinguishable from the tech corporations who enforce its soft-power diktats. There are also potshots (again, Bradbury anticipates these) at the way political correctness can be used as an instrument of cultural coercion. If Huckleberry Finn offends black people and white people are made uncomfortable by Native Son, better just to ban both of them and have done with it.

At the same time, Fahrenheit 451 is an old-fashioned star vehicle for hot properties Michael B. Jordan (Fruitvale Station, Black Panther) and Sofia Boutella (The Mummy, Climax) as well as Bahrani regular Michael Shannon. The tug of war between this commercial animus (arguably a new problem for the director) and the script’s more provocative intuitions take some of the sting out of the film’s political barbs. It’s around halfway in that we realize that this adaptation is just another timeworn yarn about a soldier (Jordan) who falls in love with a beautiful partisan (Boutella), thus pitting him against the commanding officer (Shannon) who regards him as the son he never had.

The fact that Jordan’s Montag is in fact a Cleveland-based fireman or ‘pipeman’ – an enforcer whose job is to start fires rather than stop them – changes little: these men with their frat-pack Marines mentality are soldiers at heart, commanded by Beatty (Shannon), a tough-love alpha male. Their job is to seek out and torch old media – not just ‘physical books’,  but photographs, music scores, even, it will transpire, VHS tapes  and old computer hardware – anything that encourages independent thought. Those who attempt to preserve them are branded as ‘Eels’, their punishment being to have their ‘identities’ wiped clear for a certain number of years by a device clamped to their hands, unable to access anything this world has to offer.

Soulful rebel girl Clarisse (Boutella) is an Eel who has turned informer in order to reduce the number of years she’s been sentenced to spend in no-identity limbo. Montag is the apple of Beatty’s eye, but his growing fascination for the things he burns, not to mention the allure of Clarisse, plants the seeds of doubt. Beatty too has flirted with the dark side – he keeps a banned pen in his apartment and writes shallow-deep aphorisms on scraps of rolling paper – but he keeps a lid on it, spouting Plato to his protégé with a mix of contempt and niggling self-hate that is reminiscent of another recent nuanced villain played by Shannon, The Shape Of Water’s Colonel Strickland.

Montag had a reality-TV-addicted wife in Bradbury’s book and Truffaut’s film: she’s gone here. Her role is taken over by the anonymous ‘Natives’, the populace of a country where skyscrapers act as giant screens broadcasting the forays of firemen-performers. In contrast, Montag’s eventual refuge in the Eels’ inner sanctum is a leafy New England farm full of healthy old technology like lamps and log fires. And all of a sudden, as if the film had decided to reconnect with Bradbury before it’s too late, we’re back to books being central to the world’s moral survival.

By this time, though, it’s too late for Fahrenheit 451 to repay the debt to Ray. Lushly shot and stirringly scored, Bahrani’s reboot is a decent stab at an update of Bradbury’s 1953 novel for the social media age. What’s lacking is the jazzy poetry of the original.