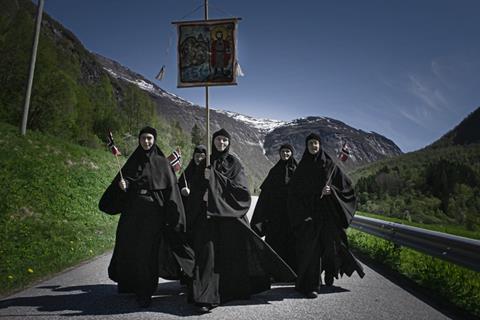 The long-serving mayor of a small Norwegian community plots for posterity in Faith Can Move Mountains (Tro kan flytte fjell), a quietly engaging feature-length debut by writer-director Silje Evensmo Jacobsen. Having bowed domestically in March, the picture makes its international premiere in the “Newcomers” competition at Thessaloniki Intermational Documentary Festival, and can expect a solid slate of bookings at similar events over the coming months. While the spectacular landscapes depicted cry out for the big screen, this quiet and intimate work will also function palatably as a TV proposition.

At the heart of the film is the construction — or rather, the ongoing non-construction — of a Greek Orthodox monastery for nuns and monks, atop a tall cliff overlooking the village of Sylte, population around 400, on Norway’s fjord-indented south-west coast. This project was first mooted in the late 1990s, at the initiative of and with the consistent support of the locality’s long-serving mayor, Arne Sandnes. Nearing the end of his final term as the film’s action proper begins in 2016, spry and seventyish Sandnes retains optimism that the dramatic structure, complete with eyecatching gilded domes, will be started “soon.”

As Evensmo Jacobsen’s film goes on, however, this optimism starts to seem increasingly misguided — the seemingly non-religious Sandnes, often presented in cosy home settings with his patient spouse, sustained by what might be termed a blind faith. It’s a trait he shares with the head of the tiny Greek Orthodox community in the district, Abbess Thavoria, a middle-aged local woman of beatifically determined mien who spent decades away from the area after becoming a nun. She is dispatched back to oversee the monastery project by the film’s third protagonist, Romania-based Father Gerontas, also known as Dionysos — a fascinating and powerful “presence” throughout, despite his only being glimpsed via archival footage.

Gerontas’ “mesmeric” eyes stare out from a black-and-white photograph on the wall of the Greek Orthodox community’s “temporary” headqurters; his strong charisma is an inspirational force driving Thavoria and her fellow believers towards their goal. Before the halfway mark, however, Gerontas’ saintly reputation has started to take on ambiguous and even sinister aspects: “his influence over young ladies is particularly incredible” notes Thavoria’s octogenarian father, whose own conversion to the faith is an intriguing minor subplot later on. Gerontas is “like God himself,” according to Sister Iakovi; former monk Jonas, however, excoriates him as a “control freak.”

Controversies surrounding Gerontas smoulder and then ignite as Thavoria’s group is effectively excommunicated by the church leaders in far-off Serbia, reducing Gerontas’ followers to the level of a “sect.” Implications and allegations of mental and physical abuse accumulate, forcing Sandnes to travel across Europe in search of hard information. Occasionally deploying to-camera interviews, Evensmo Jacobsen takes a fly-on-the-wall approach; her crew is present at several highly personal and painful interludes but, in accordance with well-worn documentary traditions, are seldom acknowleged by the subjects.

Faith Can Move Mountains ultimately hinges on two questions: will the monastery actually be built, and do we actually want this to occur? The latter involves considerations of ecology and geology (an amateur expert points out that the cliff in question is riddled with faults), as well as democracy and neighbourliness. To what extent will Norwegians, with their long-standing traditions of tolerance and liberalism, welcome and accommodate these devout arrivals in their tranquil midst?

Documentaries such as this stand or fall on their main “characters,” and Evensmo Jacobsen (who previously touched on different religious matters with her India-set 2009 short Daughter of God) has certainly struck lucky with Sandnes and Thavoria, presenting them with respect and empathy. Only occasionally erring on the side of excess with Olav Øyehaug’s tinkling piano score, she works with two cinematographers to capture the limpid splendours of the Norwegian countryside in crisply sharp digital. A film that retains a certain detachment and withholds judgement on the wisdom or misguidedness of its two main protagonists, Faith Can Move Mountains is nicely balanced to strike chords with believers and secular viewers alike.