Darin J. Sallam delivers a harrowing debut in this portrait of a Palestinian woman hiding out from Israeli forces 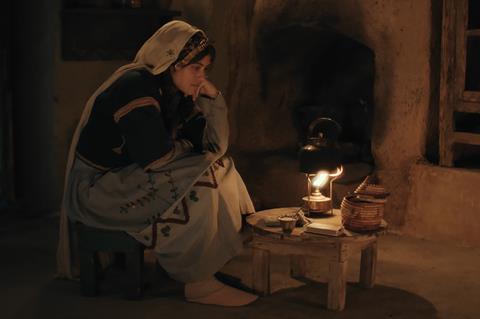 The year is 1948. Fourteen-year-old Farha (non-actress Karam Taher) has finally persuaded her father, the mayor of their small village in Palestine, to postpone plans for her marriage, allowing her to continue her education and to leave the village for a school in the city. But everything is about to change. Israeli forces roll into the region and Farha’s father locks her in a concealed food store, with the promise that he will return. The silent witness to unimaginable horrors, Farha emerges from her hiding place changed forever. This harrowing, factually-based drama makes for challenging viewing, both in the claustrophobic intensity of Farha’s experience and, more so, in the glimpses we share of cruelty meted out by renegade Israeli soldiers.

The feature film debut from Jordanian filmmaker Darin J. Sallam, Farha premiered in the Discovery strand of the Toronto Film Festival, subsequently screening in Busan and Rome. With its forthright political stance and unflinching gaze, it may be a divisive title in further festival slots and would be a tricky marketing prospect outside of the festival circuit. Farha should, however, serve as a calling card for 2021 Berlinale Talent Sallam, who was the recipient of the 2015 Film Prize of the Robert Bosch Stiftung, the 2017 Artist in Residency Fellowship at La Cite Internationale des Arts and the 2018 Global Media Makers Fellowship by Film Independent.

There’s a certain naivety to the film’s first act. The narrative of the rebellious young woman making a case for education rather than marriage is a familiar one, and it’s here that the lack of experience of some of the younger principal cast members is most evident. All this changes with a powerful scene in which Farha and her best friend Farhida (Tala Gammoh) are discussing their hopes for the future. The conversation is interrupted by a colossal explosion; the shock and fear in the girls’ reactions seems so authentic as to be unfeigned.

The sleepy village which Farha had been so eager to abandon is the frontline of a conflict. But rather than seize the opportunity to leave with Farhida and her family, Farha opts to stay with her father. Her hiding place, amid bags of lentils and jars of olives, is meant to be a temporary measure, just until the danger has passed and her father can unlock the door to release her. But as the hours stretch into days, it becomes clear that Farha is on her own.

With the camera locked in a gloomy room alongside Farha, Sallam leans on the sound design to give a sense of the world beyond the walls. It’s a world which is strafed by bullets, and torn apart by cries of distress. The use of sound is particularly effective in evoking the airless oppressive quality of Farha’s hiding place, and the relentless attrition of the certainties of her life.

But it’s what she — and we — glimpse through a crack in the wall which cements the trauma of the experience: the horrendous treatment by Israeli soldiers of a family, including two young children and a newborn baby. It’s a contentious device, but one which pointedly makes the case that the value placed by the occupying forces on the lives and the futures of the Palestinean people was considerably less than that placed on the land they were forced to vacate.