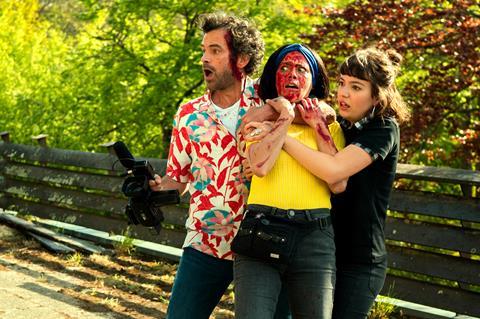 A salute to cinema so goofy and goodhearted that it is hard to resist, Final Cut tells the story of the making of a zombie film — although the real suspense involves the behind-the-scenes drama required to bring the project to life. Writer-director Michel Hazanavicius’ adaptation of the 2017 comedy One Cut Of The Dead is delightfully silly and an ideal opener for this year’s Cannes Film Festival, finding the humour and pathos in all those poor fools who devote their life to the moving picture business. Romain Duris proves to be a charmingly flailing filmmaker, while Bérénice Bejo elicits plenty of laughs as his supportive wife, a former actress who will be called into service when one of many things goes wrong with his would-be opus.

Final Cut was initially set to premiere at Sundance, but after the Park City festival went all-virtual, Hazanavicius decided to wait to unspool the comedy when it could screen in front of an audience. That decision seems wise considering the crowd-pleasing qualities of his film — not to mention that his most popular picture, The Artist, debuted at Cannes as well. Fans of zombie spoofs and films-about-films should enjoy this bauble, which is elevated by the cheery ensemble.

In the first segment of the picture, all filmed in one continuous take, we witness a crazed director (Duris) demanding that his actors bring more intensity to the zombie thriller he’s shooting. In order to amp up the realism, he evokes an ancient curse that unleashes actual zombies, his cast and crew now fighting for their lives. But what the audience is watching is confusing: why does the director occasionally address an unseen cameraman who is recording all of this? And why do the director and his white actors all have Japanese names?

Soon, the twist is revealed: that initial sequence is actually a film that struggling auteur Remi (Duris) has put together, with Final Cut then flashing back weeks earlier as he prepares to make this ambitious single-shot zombie thriller for Japanese investors. Final Cut’s third and final segment then follows Remi and his team as they shoot that initial sequence, the director determined to bravely keep the project afloat while tackling one obstacle after another as the camera continues rolling.

Throughout his career, Hazanavicius has gleefully tweaked cinematic institutions, whether it’s spy thrillers (OSS 117), silent film (The Artist) or Jean-Luc Godard (Redoubtable), so his attraction to One Cut Of The Dead isn’t surprising, given it doesn’t just spoof zombie-horror but also pays tribute to all the unforeseen disasters that need to be fixed during a film production. There is a specificity to the humour — whether it’s the ultra-serious lead actor (Finnegan Oldfield) who thinks he is making art or the enthusiastic composer (Jean-Pascal Zadi) coming up with mood music even when he is not on the clock — that will be amusing to those familiar with this world.

Because Final Cut’s pokes at the egos and insecurities of creative people are light and rarely draw blood, it is up to Hazanavicius’ cast to commit to the lovingly dopey tone. Happily, Duris’ slow-burn exasperation and Bejo’s oft-inspired turn as Remi’s wife, who must fill in as lead actress at the last minute, help sell the more ludicrous elements of the story.

Also, be sure to pay close attention to that first segment: every seemingly bizarre digression and screwup in the single-shot film will be explained, often quite cleverly, in the final sequence, which argues that no matter how bad a picture might turn out, it could have always been worse. Hardly deep but sweetly endearing, Final Cut makes both zombie apocalypses and film sets look deeply fraught — and also unexpectedly funny.

Screenplay: Michel Hazanavicius, based on One Cut Of The Dead by Shinichirou Ueda and inspired by Ghost In The Box by Ryoichi Wada