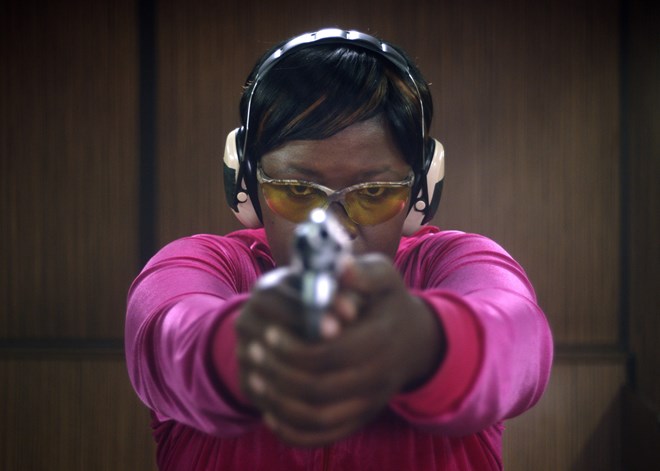 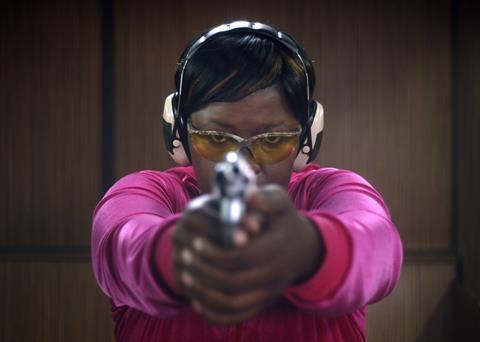 Described as a ‘western’, the third film from South African writer/director Jenna Bass certainly ticks a fair few genre boxes. Key ingredients include a horse, a gun, a body and an outlaw sprint across open country with justice close behind. But Bass tears up one of the key conventions of the western and peoples this traditionally male terrain with a core female cast. The aim – to combine an examination of some tough truths about contemporary South Africa with a gun-toting, rabble-rousing piece of pop entertainment – outstrips the execution, which is rough around the edges, particularly in a ragged third act.

Bass, who together with Wanuri Kahiu co-wrote the coming-of-age romance Rafiki, returns to Berlinale after her previous film, the racially-charged body swap comedy High Fantasy, screened in Generations last year. The showcase position as the opening film of Panorama and the marketable premise should generate further festival interest in a film which was developed with the support of bodies including Rotterdam’s Hubert Bals Fund and Berlin’s World Cinema Fund. However, without the mass appeal of a film like Thelma and Louise, or the shock value of Revenge, the picture may struggle to make an impact theatrically.

The setting for the film – the Karoo, South Africa’s weather-blasted heartland – is a land of savage extremes. And the unforgiving terrain, together with its history, bleeds into the psyche of its people. Violence lies just beneath the surface; celebrations like weddings and engagement parties have a habit of tipping over into tragedy. There is so much unfocused anger swirling around this dust bowl country that any small channel it finds soon becomes an unstoppable force of rage.

The wedding of Natalie (Nicole Fortuin) to policeman Bakkies (De Klerk Oelofse) doesn’t seem cause for much in the way of celebration in the first place. The bride is shell shocked and repulsed by the crass sexual comments of some of the guests; the groom, despite his reassurances about the wedding night, forces himself on his inexperienced wife. She flees, taking his gun, to the stable where her beloved horse is housed. A preacher who attempts to browbeat her back to her wifely duties, ends up felled by her husband’s gun. Natalie mounts her horse and rides off into the night, pausing only to collect her best friend Poppie (Izel Bezuidenhout).

The extremes of the land are echoed in the relationship between Natalie and Poppie. They call themselves sisters – both were raised by Natalie’s mother. But Poppe is is white and Natalie is black, the daughter of the nanny hired by Poppie’s racist family. And the two girls are opposites in character: Natalie is reserved, religious and innocent; thrill-seeking, hard-drinking Poppie is heavily pregnant at fifteen and believes herself well-versed in the ways of the world.

On their trail is police captain Beauty Cuba (Faith Baloyi), whose former fiance, recently released from prison, has been framed for the murder that Natalie committed. Beauty is a fan of velour leisure wear and soap operas. Her effortlessly intuitive police work is less about her instincts as a cop, however, and more about a certain naivety in the screenplay.

The camera captures the harsh beauty of the land (glowing magic hour light is favoured) and the markedly less attractive traits of the marginal characters that the two girls encounter. But the film lacks the flow and editing finesse which could tie the disparate elements – episodic scenes, an incongruous pop electronic score – together. However, it does make a final, potent but dispiriting point about South Africa: despite the racial integration of the story, the characters end up divided by colour.