'For The Birds': Sheffield Review 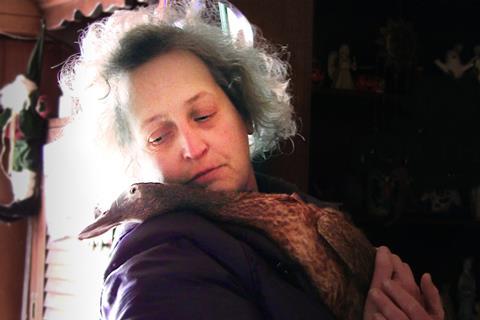 A seemingly straightforward animal welfare case proves to be much more complex in For The Birds, a poignant documentary in which all the collateral damage is human. Richard Miron follows the story as it spirals from comic eccentricity to heartbreak in a film with a similar emotional tug to Sundance Grand Jury prize-winner Dina. It should take flight at festivals, and could secure some modest theatrical life.

Leaves many questions unanswered, content to observe events and their impact

Kathy Murphy is a woman who loves animals. The story begins in Wawarsing, New York, where Kathy lives with her husband Gary. One day, she finds a duckling in her yard and decided to raise it. Ten years later, her yard and home are now overrun with hundreds of chickens, ducks, geese and two formidable-looking turkeys. At least, she will never have to buy eggs again.

Kathy regards the fowl as her close family, caring for them, cuddling them, watching television together and giving them the run of her home. “I would die for them,” she declares. Kathy’s agitated manner, bedraggled hair and jerky, staccato head movements suggest that she has even started to resemble one of her birds. She is an endearing, slightly comical character, but we never doubt her good intentions or her devotion to her beloved animals.

For the Birds raises lots of questions in the viewer’s mind, not least how director Richard Miron secured Kathy’s trust when she seemed so determined to keep the human world at arm’s length. It leaves many of those questions unanswered, however content to observe events and their impact, as animal welfare officers become involved, Kathy is labelled and shamed as an “animal hoarder” on national news and is eventually taken to court.

Clearly there are mental health issues here and equally obviously the seemingly mild-mannered, supportive Gary is far from happy with a wife who only has eyes for her animals and a home that is uninhabitable. Members of the Woodstock Farm Animal Sanctuary treat Kathy with a degree of respect, and we never lose sympathy for her even as the tone of the film grows darker and more tragic.

Miron continues to just document what happens but shapes our emotional involvement in the story by juxtaposing the current reality with home movies of happier times when Kathy and Gary were just married, family and friends were welcome, their mobile home was clean and bustled with life. The film then deepens into a lament for life’s wrong turns and unexpected misfortunes.

Miron’s cinema vérité approach still finds time for contemplation and appealing images of the countryside through the changing seasons. His very promising feature debut remains consistently engrossing through unexpected developments. He even surprises us with the sense of renewal and hope that suddenly blossoms from Kathy’s darkest hours.