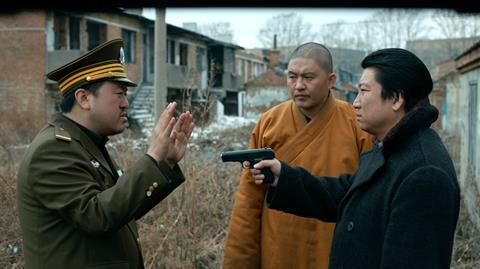 A frayed Chinese flag flutters listlessly over the tattered fringes of a frostbitten wasteland in the North of the country. So the scene is set for an offbeat, sidelong glance at Chinese society which combines a striking visual impact with underplayed, deadpan humour.

It’s likely that some of the comedy in the latest film from Jun Geng (Youth, The Hammer And The Sickle Are Sleeping) might be a little too culturally specific to fully chime with an international audience. But the symbolism of a broken-down and largely abandoned industrial expanse populated almost entirely by con-artists is hard to miss.

The leisurely pacing and laconic approach might be a hurdle in connecting this film with wider audiences, yet the first rate technical package, in particular the arresting photography by Wang Weihua, could recommend this picture to those who enjoy the similarly dry, slightly absurdist approach of Aki Kaurismaki. Festival berths seem likely following the film’s premiere in the World Dramatic Competition in Sundance, with the film being of key interest in events with a focus on new voices from the region.

The backdrop to this picture is well-chosen. Jun Geng places his characters in blighted rows of empty houses with yawning, smashed windows. Sprawling weeds have started to consume the public thoroughfares, and the factory buildings are sagging and defeated. Visual composition emphasises both the uncanny emptiness of the environment and the alienating sharp-angled symmetry of its construction. The sound design captures the continual distant rumble of a manufacturing industry which has moved on to consume some other part of the country.

Into this unforgiving world comes a man with a suitcase. A soap salesman by trade, he offers free sample of his product; but the scent swiftly renders anyone who inhales it unconscious, leaving the man free to rifle through their pockets and help himself to their possessions.

His first target is a hustler who is trying to sell Kung Fu classes on the street. The local police are less than sympathetic and disinclined to do anything that might solve the case. Also prowling the empty town is a monk with a hard-luck story of a monastery consumed by a freak fire. “Come and touch me for luck. The universe wishes it,” he intones, before hitting his victims up for a donation. “Friend, we are playing the same game,” says the wily soap salesman. “Don’t play dumb.”

In fact, almost everyone we meet is playing some version of the game; some more successfully than others. In time, a grudging kinship builds between the men who have hitherto been trying to scam each other. The soap salesman and the fake monk smoke cigarettes together and compare their conning techniques; there are long shots of taciturn shared meals featuring lots of noodle shovelling and slurping.

An accidental death stirs the characters out of their inertia and signals the start of the third act. But, it turns out, despite their opportunistic quick-thinking, these are not people that you would want around you in a crisis.