After three films in 2017, Hong Sangsoo’s first feature this year is both short and sweet 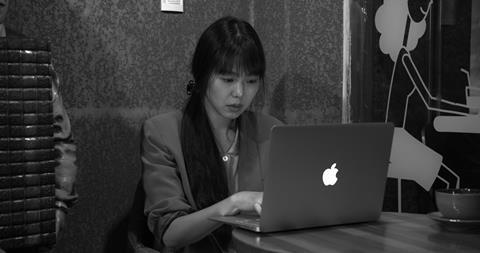 Short, bittersweet and unsurprisingly soaked in soju, Hong Sangsoo’s Grass could double as a snapshot of his filmography; tales of life, love, connection, sorrow and yearning all unfurl in a cafe. Each of the filmmaker’s features may seem more archetypal than the last, but this 2picture, bowing at the Berlinale’s Forum, happily focuses his now-recognisable traits, themes and flourishes into a slightly different conversation-driven package. This time, he’s serving up an existentially-minded series of vignette-like chats between men and women.

Unsurprisingly, Kim Minhee stands out among the cast

Indeed, in his only film slated for this year thus far after 2017’s three-title bonanza, Grass demonstrates a fresh type of playfulness from the prolific filmmaker. It’s a movie filled with his usual intimacy, but it’s also one that’s purposefully more concerned with the bigger picture than the individual details. Names aren’t mentioned, relationships aren’t explained, and emotions, not incidents, fuel the discussion. The approach engages, aided by the movie’s brisk 66-minute running time —although, while a more abstract, ruminative Hong feature is likely to intrigue existing fans, it’s ultimately destined to play best on the festival circuit.

Brandishing his classic naturalistic style, Hong’s black-and-white effort pieces hops between conversations at the central alleyway coffee house, listening in — and zooming for emphasis where necessary, of course. On the Beach at Night Alone star and Berlin 2017 best actress winner Kim Minhee, in her fourth consecutive film for Hong, proves a distinctively solo figure amidst the groups swapping chatter over beverages. Writing at her laptop but quick to explain that she’s not a writer, she’s happy spinning her eavesdropped snippets into her own commentary.

Among her fellow patrons: a younger couple (Gong Minjeung and Ahn Jaehong) reconnecting after obvious difficulties, an older pair (Ki Joobong and Seo Younghwa) swapping dreams and disappointments, and two friends (Jung Jinyoung and Kim Saebyuk) loosely talking about collaborating. The men are all actors, and there’s more than one writer on the premises. When Minhee’s Areum — named in the credits, rather than dialogue, and sharing her moniker with her The Day After protagonist — leaves to meet her brother (Shin Seokho) and his new girlfriend (Ahn Sunyoung), they grab a drink at a restaurant within walking distance, where another duo (Kim Myoungsu and Lee Youyoung) discuss their shared pain.

More commonalities arise as the talk continues and day turns to night, including agonies over deaths, suicide and wishes for different lives. And while much can be read into the plethora of connections and similarities, as well as the thread between the past, present and future, Hong is his typical mischievous self. The same can be said of Areum as she flits between storyteller and participant. Whether she’s simply observing the figures around her, trapped in the same space as them or conjuring up their dramas as she types, Grass trades in life’s repetitions with thoughtful flair.

Unsurprisingly, Minhee stands out among the cast, though every player — many of them Hong regulars — sells the emotion behind each conversation. That said, it’s the touch of pairing the majority of Grass’ discussions with a piece of classical music (Schubert, Wagner and Offenbach, for example) that has the biggest impact. The film might paint existence as a cycle as natural as the garden growing outside the cafe, but each melodic tune offers a reminder of the beauty and variety in its ebbs and flows.