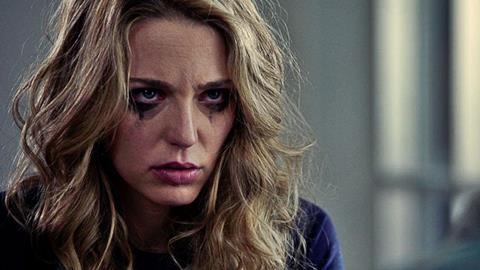 As a cycle of living, dying and repeating plagues a college student in Happy Death Day, viewers can be forgiven for feeling their own sense of déjà vu. Thankfully never taking itself too seriously, the latest Jason Blum-produced comedy-thriller is happy to carve out its spot as the horror-themed, millennial-focused Groundhog Day, and to have fun doing so. A dynamic lead performance and a willingness to keep things short and snappy also ensure viewers won’t mind venturing into rehash territory.

Indeed, fresh from It’s recent success and with Hallowe’en fast approaching, Universal will be hoping the timing is right for a slasher effort as pithy as its pop soundtrack. They should be rewarded with another Blumhouse hit after Split and Get Out, with Happy Death Day well-placed to get a foothold with its youthful target market before the latest Saw outing, Jigsaw, arrives in theatres — and it is also likely to find a sizeable post-theatrical audience via streaming.

In a genre filled with countless tales of unhinged killers stalking and slaying pretty young things, part of Happy Death Day’s appeal stems from both leaning into and playing with the usual tropes. From a few sly winks, to reiterating that it’s Monday the 18th, to a general Scream-like tone, it’s a film made with a clear awareness of genre history. When sassy sorority sister Tree (Jessica Rothe) is forced to relive her birthday endlessly, starting out in classmate Carter’s (Israel Broussard) dorm room and culminating with a run-in with a mask-wearing murderer, first she makes all of the usual decisions. Then, as she tries to put an end to getting killed over and over again, she doesn’t.

Beginning on the morning after a drunken night out, Tree’s day involves a regular array of college activities: stumbling home through the busy campus quadrangle, shrugging off the judgment of bossy house president Danielle (Rachel Matthews), declining a celebratory cupcake from her studious roommate Lori (Ruby Modine), and trying to get some lusty time alone with her professor Gregory (Charles Aitken). In-between ignoring her dad’s calls, she’s also begrudgingly getting ready for a surprise party she is well aware of. When she finally drags herself along, it doesn’t end well.

Before you can say “it’s groundhog day”, she’s waking up in the same place, having the same awkward interaction with Carter, and stepping through the same events she has just lived through, all in a nightmarish loop. That Tree will realise what’s going on always feels inevitable, as do her attempts to understand why and how to stop it. Still, as much as director Christopher Landon (the director of the Blum-produced Paranormal Activity: The Marked Ones) and writer Scott Lobdell follow a familiar pattern, they also let their heroine become more than just another final girl.

While Happy Death Day isn’t a film that delves particularly deeply into its characters, watching Tree adapt, take charge and confront her situation proves one of its highlights. Again, Bill Murray has been there and done that before without his own homicide to solve, though there’s enough to enjoy in Tree’s spirited endeavours, and to distinguish her from usual horror movie victims. Even with a stock-standard backstory, a routine romance and more than a few clumsy pieces of dialogue, she’s not just running, hiding and managing to survive, but learning and growing. That the vibrant Rothe, most recently seen in La La Land, sells the evolution seamlessly is a considerable help.

As far as jumps and jokes are involved, Happy Death Day shows no desire to eschew the obvious, but that doesn’t mean that easy-to-anticipate scares and cheesy laughs don’t largely work given the film’s overall swift, spirited, satirical-leaning mood. Technical credits are solid, corralling Wolf Creek 2’s DoP Toby Oliver and Get Out’s editor Gregory Plotkin into a number of striking shots and transitions in an image-heavy effort — both in unraveling the narrative, and occasionally misdirecting viewers trying to piece the puzzle together.