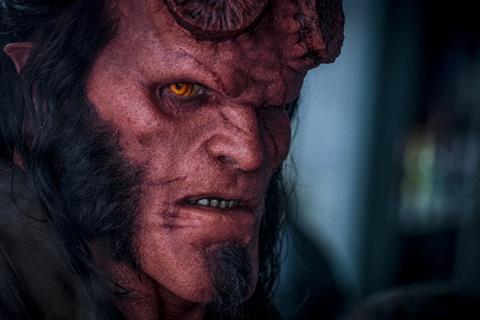 Bloody, and bloody ludicrous, Hellboy boasts plenty of attitude and gore, all in a desperate attempt to seem edgier than the previous big-screen iteration of this demon-spawn antihero. Consciously moving away from the B-movie pleasures that director Guillermo del Toro brought to the franchise more than a decade ago, this remake of the Dark Horse property is a unrelentingly 15-rated action-horror film (‘R’ in the US), casting Stranger Things star David Harbour as the titular enforcer, who is noticeably more hardboiled, sarcastic and anguished this time around. But between the overblown poor CG, witless dialogue and pervasive, numbing violence, the new Hellboy deserves its own special circle in Dante’s Inferno.

A superhero movie that is profoundly unsuitable for children.

Opening widely on April 11, this remake will test how well moviegoers remember the cult comic-book character. Hellboy doesn’t sport many big names, but the hard-15 content should help distinguish it from the more family-friendly Shazam! Still, the film is merely marking time before Avengers: Endgame demolishes all in its path.

Harbour plays Hellboy, a half-demon who works alongside human beings as a paranormal investigator, hunting down evil monsters. Although he loves Professor Broom (Ian McShane), the human who adopted him as a boy, he finds himself questioning his place when he squares off with the Blood Queen (Milla Jovovich), a powerful witch who believes their destinies are linked — and that he should assist her in destroying humanity.

Director Neil Marshall (The Descent, episodes of Game Of Thrones) has crafted a superhero movie that is profoundly unsuitable for children. Not only is copious blood shed, heads are torn from bodies, helpless bystanders are ripped in half, and you never know when a character will be impaled or stabbed through the eye. Clearly, this remake wants to establish itself as a grisly, grownup fantasy film, but Marshall and screenwriter Andrew Crosby miss the mark on exactly how best to achieve that down-and-dirty tone. As a result, Hellboy postures obnoxiously, parading its strained splatter-house aesthetic as proof of its impertinence.

Taking the reins from Ron Perlman, who played Hellboy in the del Toro films as a gentle, sulking giant, Harbour overdoes the character’s seen-it-all-before gruffness. Nearly all of Hellboy’s lines involve either a wan quip or an expositional update on his tortured internal journey to find a place where he belongs. By trying so hard to sell the audience on how surly Hellboy is, Harbour drains this antihero of spark or wit. Oscar-winning makeup designer Joel Harlow does superb work transforming the actor into the hulking, buff, burnt-red creature, however.

Elsewhere, Hellboy is an unfortunate mixture of cheap histrionics — lots of handwringing about character destinies and convoluted backstories — and superhero-movie conventionality. Long before the de rigueur ending tease of future instalments that will, conceivably, feature other characters from the Hellboy comics, this remake struggles to balance Arthurian legend, father-son drama, nonsensical plotting, gross-out scares and increasingly unwieldy action sequences, complete with overly complicated digital trickery and a clattering hard-rock soundtrack. There’s a lot going on in Hellboy as the film dutifully shuffles from set piece to set piece while frantically trying to world-build on the fly.

The supporting cast doesn’t do much to help. Sasha Lane shows spirit as Hellboy’s friend Alice, who has psychic abilities, but the American Honey discovery is stuck in a thin role. Jovovich struts around in style, understandably rejecting any semblance of subtlety while playing a character called the Blood Queen. As for McShane, the Deadwood star goes on prickly-father-figure autopilot, adding some grit to pointless confrontation scenes between the professor and his demon son.

When del Toro made 2004’s Hellboy (and the sequel four years later), he made an emotional investment in the material’s exploration of outsiders looking for a home — a familiar trope in his work. And even though he was confined by the films’ PG-!2 (US-13) rating, the director nonetheless managed to conceive magical realms and smart, fun action scenes. By comparison, Marshall simply slathers on more and more gratuitous violence, finding little poetry or inspiration in the bloodletting. “The monster inside him cannot be denied,” someone says of the rampaging Hellboy at one point. Pity no one considered that there might be a compelling soul in there, too.