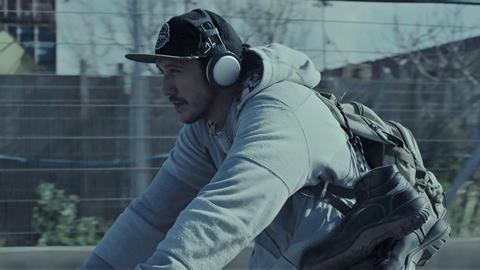 An immigrant in Israel strives for a better life while also trying to cope with his everyday problems through hip hop in Here and Now. The result is a film which is steeped in the bleakness of struggling to get by, while also recognising the small, crucial moments of catharsis. Director Roman Shumunov might be making his fiction debut, but his feature has an air of sincerity and sensitivity that should endear it to festival programmers after its Jerusalem Film Festival bow — and certainly helps to patch over the screenplay’s familiar elements.

Living in the slums of Ashdod, Andrey (Vlad Dubinsky) is a dutiful son to his widowed, hospitalised father (Yury Tsofin), as well as a doting brother to his pre-teen sister Christina (Mishel Vainberg). He’s fine with holding the fort; however being everything to everyone — guardian to his sibling, earner of the family’s only paycheque and trying to stop the bank from reposessing the mortgage — takes a toll. Shumunov and his regular screenwriter Alexander Plavnik (short No One But Us, documentary Babylon Dreamers) adopt an empathetic but matter-of-fact approach to Andrey’s mounting woes as they keep piling them up. That said, the heartstrings get a strong tug when Christina, fresh from watching movies in class, declares that she wants to be a bad guy because the villains always win.

It’s a line of thinking that Andrey himself is eventually forced to pursue, though he’d rather be rehearsing and rapping with his hip hop group. In two weeks, they’re scheduled to perform in a coveted music festival slot, and they need a new song for the occasion. Formed with his fellow immigrant pals Renat (Renat Hasanov), Zura (Zura Kartvelishvili) and Mixer (Eduard Hmelnitsky) — “we’re one Georgian and two Russians”, they declare on stage — the band is an outlet for these outsiders in an unwelcoming land, their lyrics filled with observations about their difficult situation.

Tales of troubled lives improved through music are hardly rare, and neither are stories about desperate times calling for desperate measures, the two areas that Here and Now leans firmly into. Indeed, when Mixer arrives at Andrey’s flat with a gun and asks him to hide it, there’s no need to guess where latter’s path will eventually take him — or how he’ll find a way to pay his escalating bills.

Subtlety might not rank among the film’s strengths, but juggling the drama of Andrey’s life with the solace that music brings — even if only fleetingly — is a task that Shumunov takes on with compassion and delicacy. Even when Here And Now charges a character with literally explaining how hip hop and rap helped him to process a personal tragedy, it’s such a quietly emotional moment that it never plays as overbearingly heavy-handed.

Elsewhere, when the story segues from concerned school social workers worried about Christina’s withdrawn attitude, to disapproving cops using violence to evict the band from their practice space, to the crime underworld that Andrey steps into out of necessity, the movie largely shows rather than tells. In doing so, Shumunov favours the realistic and understated — stripped back performances, especially Dubinsky, naturalistic lighting, both in grimy basements and on the street; and a tone that’s never wallowing but never sugar-coated either. It all suits this modest, enaging slice-of-life film.