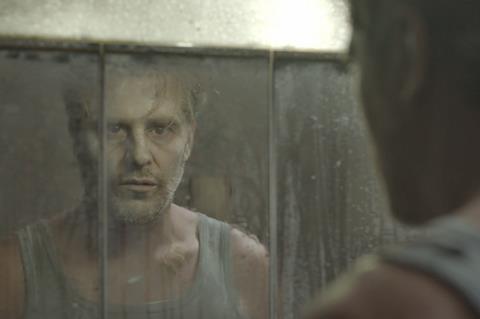 Dave (Tom Vermeir) has hair that looks as though it was washed in congealed bacon fat and trousers so filthy that they creak when he puts them on. His home, a condemned hotel which closed long ago but still plays host to a stream of outcasts, looks like the aftermath of an environmental catastrophe. Over the course of a day (or perhaps longer — time is a sticky, shapeless thing in Dave’s world), he slips into an increasingly nightmarish hinterland. He witnesses outlandish and macabre scenes, finds himself imprisoned in a glass cube for the amusement of a trio of hard-eyed women, and has to deal with the death of the aunt whose pension bankrolled the hotel. Hallucinatory, hilarious and probably the most toe-curlingly unsavoury film ever made, the debut picture from Stef Lernous is a repulsively compelling one-off.

It’s a bad trip, certainly. But it’s also a hell of a ride.

Films as singular as this one — there are shades of early Lynch in a picture which at times feels like a mutant offspring of a Jeunet and Caro fantasy — tend to polarise audiences. But Hotel Poseidon is likely to delight strong-stomached genre fans and could find a home in further festivals after Fantasia and Brussels. It’s distinctive enough to generate the kind of word of mouth which may earn cult status.

A reeling, disorientating opening single shot weaves erratically like a fly, fat from feeding on the dead fish in one of the stagnant tanks. The shot takes in sticky beer glasses, ashtrays all but buried under a scree-slope of fag-butts, a spontaneously combusting coffee urn, and a film of filth on everything — including the camera lens. One can only imagine how much fun the design team had creating a backdrop so creatively disgusting that it could trigger a full OCD panic attack in less than a minute.

Accompanied by a score of brutalised string instruments, Dave drifts through corridors in which you can almost see the stench of despair and sweat-rotted socks. He encounters a demented woman in a putty-coloured bra, a stray tourist looking for accommodation, and the axe-wielding, beer-swilling Jacki (Dominique Van Malder), who is remodelling the hotel’s bar area. Highlights will include “a live autopsy, a machine which simulates earthquakes.” Every character has a cadaverous complexion similar to wet cement, from the pair of huckster undertakers to the barmaid who, through a series of jarring jump cuts, recalls childhood trauma (“when I was five, he forced me to eat a kid’s Bible”) to the recently deceased Aunt Lucy.

All the performances are grotesquely clownish, all gaping mouths and rolling eyes. It’s thoroughly disconcerting and there’s very little in the way of plot to cling onto for safety. But there’s a tipping point, somewhere after the dissection of Aunt Lucy’s corpse and around the moment when a singer takes to the stage with a Casio keyboard, a skeleton suit and a voice that sounds like a cross between Leonard Cohen and a sex offender. A kind of beleaguered resignation sets in, both in Dave and in the audience. It’s a bad trip, certainly. But it’s also a hell of a ride.