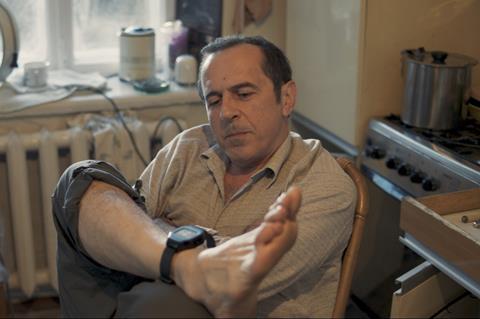 David (Merab Ninidze), a university professor in a provincial Russian campus which has clearly seen better days, launches a one-man social media campaign designed to reveal the corruption of the local mayor. His actions backfire however, and he finds himself placed under house arrest and served with trumped up embezzlement charges (the same charges, coincidentally, which were made against Russian director Kirill Serebrennikov, who spent 18 months under house arrest). Aleksey German Jr’s latest film, a Kafkaesque single-location satire about the considerable cost of doing the right thing, lacks some of the dense complexity of his earlier work. But in David, the film has a charismatic and textured central character who widens the scope of a picture which rarely strays beyond the confines of a cluttered, claustrophobic apartment.

In Russia, the price of having principles can be high indeed

German Jr won the Venice Silver Lion for Paper Soldier in 2008 and his two previous films, Under Electric Clouds and Dovlatov, screened in Competition in Berlin. This, however, is the first of his films to be shown in Cannes’ official selection. The restrictions of shooting during the pandemic are evident in a scaled down production which, while wryly funny at times, might lack the visual impact to propel the picture out of the festival circuit.

In the central role, Ninidze is an abrasive pleasure. His relationship with his tiny, bird-like mother (Roza Khairullina) is one of the film’s main strengths. She smokes continually and bombards him with peppery criticism, slapping him repeatedly for over-salting the soup, and remarking, rather disparagingly, that “you’re the only one who thinks you are scary.” David clearly adores her, smiling benignly through her nicotine-tarred monologues. Her absence, once she departs the tightly focused core of the story, is keenly felt.

The impact of incarceration is emphasised in the rhythms of the film. German Jr uses repetition – the daily state-sanctioned period of exercise (this truly is a film made in the spirit Covid-19 lockdowns) in the grounds of the university accomodation where David lives; the continual rain; the endless cigarettes which punctuate every waking moment; the refrain, repeated by numerous characters, that “they’re going to put you in jail.” Gradually, David’s defiant spark of mischief is extinguished.

Growing pain from an undiagnosed ailment is a physical manifestation of the mounting pressure of his situation. And then there’s the interior of his very ‘lived-in’ apartment, which starts out seeming eclectically chaotic but inviting in terms of its décor. By the end of the film, thanks to camerawork which emphasises the walls and bars which box the characters within the frame, the mess takes on an oppressive aspect.

It’s not just the incarceration that takes its toll. All the certainties of David’s life start to peel away. His colleagues fail to support him; his neighbours denounce him; even his water supply is cut off. In Russia, the price of having principles can be high indeed.