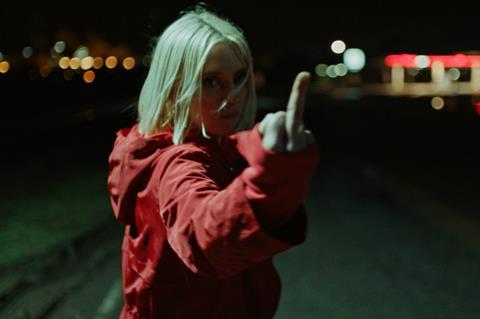 A woman engages in an increasingly savage battle with her abductor in Hunted, a nasty little horror-thriller that aims to tap into the zeitgeist by turning a brutal standoff into a meditation on toxic masculinity and #metoo. French comic book artist and filmmaker Vincent Paronnaud immerses the viewer in this tense genre exercise, with the results falling somewhere between thought-provoking and stylishly pulpy. Although it’s never wholly successful in either mode, Lucie Debay gives a fully committed, eventually downright feral performance as the latest target of a sociopath. Premiering at Fantasia, Hunted has all the ingredients for a crowd-pleasing midnight movie.

Hunted gets progressively stranger as it rolls along

Shot in Belgium with its location never specified, this is the English-language debut of Paronnaud, who co-directed Persopolis. There’s sufficient gore, twists, and grindhouse weirdness here to propel word of mouth, which the film will need to boost play. Paronnaud’s timely themes could help make this a popular pick for further festivals and theatrical exposure — including the US, where RLJE and Shudder will be handling distribution.

Eve (Debay) is a stressed-out supervisor for a construction company, staying at a hotel overnight as part of a job. She impulsively goes out to a club, where she meets a handsome unnamed man (Arieh Worthalter) who lures her back to his car to make out. Suddenly, Eve realises she’s being kidnapped by the man and his creepy accomplice (Ciaran O’Brien). A sudden car accident gives her an opportunity to escape, and she fees into the nearby woods, with the two men in hot pursuit.

Hunted’s unnamed assailant has a camcorder, and we see footage of him torturing and presumably raping and killing past victims. (Worthalter plays this misogynistic monster with serene menace.) Much of the film consists of Eve playing a desperate cat-and-mouse game with these two men as she tries to elude capture in the forest — the weapons at their disposal will include a boxcutter and a bow and arrow.

Those unsophisticated tools hint at one of Hunted’s overarching theses, which is that humanity really hasn’t evolved that much beyond the primal impulses of the animal kingdom. (Crows, snakes and a wild hog will all play a part in the plotting.) More specifically, Paronnaud suggests that men are beasts, and while that’s not an inapt observation, it’s not particularly original, either. In fact, Hunted’s extended critique of toxic masculinity fails to say much that is new, and despite Worthalter’s unsettling turn, the unnamed man is more metaphor than compelling villain. Eve is mostly fighting a stand-in for the patriarchy.

Starting off as a beleaguered but demure employee who is tired of her overbearing male boss, Eve will be thrust into a harrowing experience where she must survive by her wits and brute strength. It’s a familiar narrative arc — the seemingly ordinary protagonist who finds her inner warrior because of a life-and-death struggle — but Debay helps sell that cliché. Initially scared out of her mind, Eve slowly becomes more powerful — almost as if she’s connecting to something untamed within herself once she goes into the forest — and the actress bolsters the story’s mythic aspirations by delivering a performance which is elemental and highly physical.

As one might expect from a genre offering like this, Hunted gets progressively stranger as it rolls along, introducing new characters and unveiling ludicrous surprises. Watching the film’s plunge into the demented has its kicks: the script flaunts its gruesome kills and gnarly wounds once our combatants move deeper into the woods and further away from any semblance of civilisation. Without subtlety, Paronnaud argues that, stripped down to our core nature, we remain wild things — and that men are barbaric inflictors of violence on women, treating them like prey and playthings.

But the director’s ideas end up being less engaging than the grisly images he and cinematographer Joachim Philippe craft together — particularly near the end as Eve and her pursuer suddenly find themselves in very different surroundings. For all the big themes rustling around in Hunted, they lack the startling ferocity that develops on Eve’s face — for her, there’s nothing theoretical about this study of predatory male behaviour.