Michelangelo Frammartino continues his exploration of cinema in Italy’s farflung outposts, this time Calabria of 1961 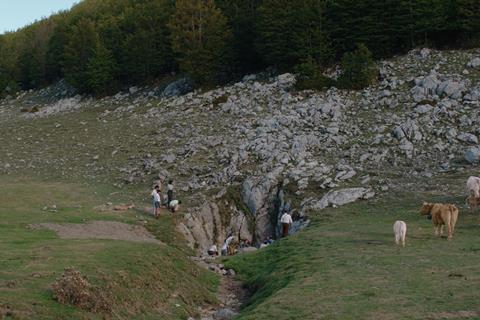 Il Buco may have been given a Venice competition slot, but hardcore cineastes can rest assured: Italian director Michelangelo Frammartino has lost none of his radically experimental edge. Il Buco (‘The Hole’ in Italian) spends a good part of its running time following, chamber by chamber and tunnel by tunnel, the progress of a 1961 speleological expedition that explored and charted one of Italy’s deepest caves, the Bifurto Abyss in Calabria’s remote Pollino mountains.

Frammartino seems to be conjuring a film out of pure intuition

Frammartino has worked as much in video installation art as in conventional filmmaking, and this, his third feature, shot by veteran Godard and Resnais collaborator Renato Berta, contains long passages that would not look out of place in an art show. Cavers’ headtorches create strange and dazzling light effects in a cavern that seems at times like the innards of some great beast. Although it has a more linear structure, Il Buco is if anything even more impenetrable than the gloriously strange Le Quattro Volte which garnered awards and critical kudos following its 2010 debut in Cannes’ Directors’ Fortnight.

What’s going on beneath the surface will tease patient adiences. What actually takes place is simply stated: we see, in a series of long shots so relentless we rarely get a proper look at the actor’s faces, a reconstruction of a visit that a group of young amateur cavers from Turin paid to Calabria in 1961. They’re not miked up, so we only catch the occasional word from a voice track that becomes simply one more ambient sound in this music-less film, like the cow bells of the long-horned cattle that graze the upland valley where the speleologists are headed.

Meanwhile, up above the valley floor, keeping a weather eye on the cattle, is a wizened cowherd whose only utterances are the calls he makes to the herd – calls not that different from the hollers the cavers use to order ropes to be let down or taken up by those stationed at the mouth of the abyss above.

Il Buco intertcuts these two stories without ever intermingling them. The cowherd comes home with his donkey to a rough wooden hut that he shares with other hardy mountain men, whose idea of hilarious evening entertainment is to persuade one of their number to do donkey impressions. One day, pretty much when the eager young speleologists enter the cave after pitching camp in the valley, the old guy fails to return to the hut – and is found lying in the woods, hanging onto life by a thread.

There’s no mistaking one of the subtexts of Il Buco, as it’s not particularly subterranean. These fresh-faced Turinese youngsters, with their state-of-the-art kit, arrived in a desperately poor part of Calabria just at a time when northern Italy was piloting the country’s post-war ‘boom economico’, symbolised by the recently inaugurated Pirelli Tower, a Milanese skyscraper seen here in archive RAI TV footage. Escorted by the army, we see them spend just one night in a local village where locals gather outside to watch variety shows on the single television. Poring over their maps, prepping their headtorches, they sleep in the church sacristy next to a wooden statue of the crucified Christ, before heading up the mountain to pitch their base camp. Most Italian viewers will know that the traffic between Calabria and Turin was in the other direction, in the form of economic migration. And yet here come these boisterous torinesi, skimming the region’s surface while also delving into its viscera.

But with Frammartino such metaphors are never heavy-handed. As in Le Quattro Volte, he seems to be conjuring a film out of pure intuition, juxtaposing ideas and stories because he is as curious as we are about how (or if) they fit together. There are a couple of devastatingly beautiful sequences where magazine pages are torn out, lit and dropped into the abyss below in order to illuminate it.

Whether or not anyone quite ‘gets’ the Calabrian director’s new film, how often do we see truly original moving images on screen? In its exploration of one of the world’s deep places, illuminated solely by the torches of its actor-speleoplogists, Il Buco proves that cinema still has the capacity to astonish in a very innocent, childlike way as a medium in which light illuminates a black screen and creates beauty.