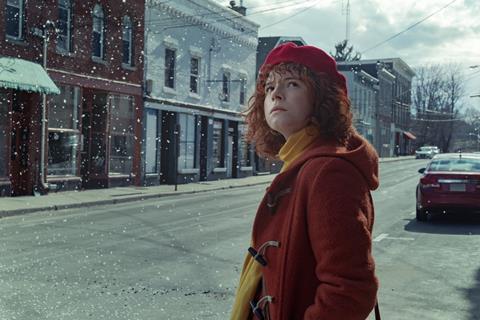 “Be careful out there, the roads are treacherous.” That warning, which comes about halfway through Charlie Kaufman’s enigmatic psychological horror film, refers to the snowy highway traversed by the main characters, but it’s also a fitting advisory for a picture in which seemingly every interaction is fraught with multiple meanings and vague menace. In I’m Thinking Of Ending Things, an unhappy young woman goes to meet her boyfriend’s parents, but that deceptively banal premise doesn’t come close to encompassing what befalls her, which includes meditations on domesticity, ageing and the fear that maybe there’s something deeply, irreparably wrong with you.

A challenging work brought to stunning life by Jessie Buckley and Jesse Plemons, Ending Things will appeal to fans of Kaufman’s twisted, despondent worldview. But as judged by the turnout for his two previous directorial outings, the critically acclaimed but commercially overlooked Synecdoche, New York and Anomalisa (which he co-directed), that would suggest only a niche audience will tune in when the film becomes available on Netflix starting September 4. Still, those willing to go along on this metaphysical road trip will be treated to an adventurous study of depression and anxiety that also makes room for a musical number.

Buckley plays an unnamed woman who is thinking about dumping her boyfriend of a few months, Jake (Plemons). But before she gets around to it, she reluctantly agrees to accompany him on a car trip to his parents’ house in the country, their long drive through the snow punctuated by passive-aggressive exchanges. (For instance, she’s not sure whether to be amused or annoyed by the fact that he loves musicals.)

When they get to the house, she’s introduced to his parents (Toni Collette, David Thewlis), who are identified only as Mother and Father in the end credits. The young woman tries to make a good impression over dinner, but each conversation topic seems to underline an unspoken tension within the room. Is the young woman imagining it, or is there something ominous lurking in this house?

Based on Iain Reid’s novel, Ending Things takes delight suggesting dread without ever being explicit as to where the danger is coming from. Kaufman works with Ida and Cold War cinematographer Lukasz Zal, opting for a similarly boxy aspect ratio to heighten the sense of claustrophobia, whether in the car or inside the home. Occasionally cutting to a high school hallway that appears to have nothing to do with the central story, Kaufman carefully shapes the moody atmosphere alongside editor Robert Frazen, creating a Lynchian sense of unease in which seemingly mundane occurrences are invested with existential terror.

Buckley is our surrogate into this increasingly creepy environment, and she’s superb as a painter who can’t quite make sense of the world around her. Often speaking in an interior monologue, more to herself than to the audience, the main character comes across as sad and anxious, and Kaufman’s off-kilter tone seems to emulate her bristling personality and alienation. Like everyone in Ending Things, the young woman is intentionally opaque — a riddle we can’t hope to solve — and as she tries to navigate this surreal dinner, neither she nor the happenings in the house make any more sense the longer we’re there.

The other actors are caught in the same spell, with Collette particularly strong as almost a parody of the over-friendly all-American mom. Plemons, who has shown a knack for depicting eerie everymen in Breaking Bad and The Master, proves to be wonderfully unknowable as Jake, the bland boyfriend who may be hiding a malevolent streak beneath his unremarkable surface. Kaufman’s cast is adept at portraying commonplace characters whose weird inflections or unpredictably combative conversational style leave us wondering what unseen horror is about to visit the young woman.

Ending Things continues to journey down unexpected paths, but by that point anything resembling “normal” behaviour has long since entered our rearview mirror. Kaufman has often flirted with the bizarre, and the film’s final stretches are among his nerviest. Some may be frustrated that Kaufman leaves viewers to figure out his ultimately puzzling narrative, but this film’s entrancing strangeness begins to assert a hallucinogenic hold. Even if the roads are sometimes treacherous, they’re well worth exploring.

Screenplay: Charlie Kaufman, based on the book by Iain Reid